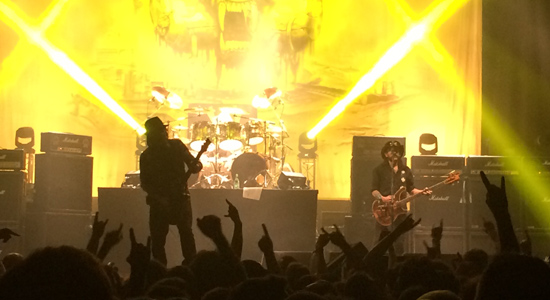 Rarely are audiences treated to two bands of such legendary stature on the same bill. And interestingly, the Damned and Motörhead are not merely pioneers in punk and metal, respectively; they also have close historical ties.

Motörhead’s Lemmy played bass on the Damned’s cover of the Sweet’s “Ballroom Blitz,” and the two bands once merged for a live version of “Over The Top” under the contracted moniker Motördamn. But their joint immortality was ensured when they both made unforgettable cameos on the ’80s U.K. sitcom The Young Ones. YouTube that shit up, kiddies.

First up: the punks.

Captain Sensible is an incorrigible yukster. He has been playing the clown before audiences for more than 35 years as bassist, then guitarist, for the Damned. The first time I saw him perform—at the original 9:30 club in D.C. back in the early 90s—he improvised poetry about Sylvester Stallone sucking his cock.

“We’re the Damned,” he yells tonight. “And we sound something like this … ”

The “this” should have been the most bracing, razor-sharp punk from the original wave of revolutionary yobbos. In a genre that, at the time, eschewed technical skill, the Damned was rebellious in its virtuosity. Drummer Rat Scabies was a Keith Moon who could actually keep time. Sensible was every bit the guitar god that Page and Clapton were. And unlike Johnny Rotten, Dave Vanian could not only carry a tune but also apply a range of “treatments” to his vocals, appropriate to the song’s mood.

Unfortunately, tonight, with only Sensible and Vanian remaining from the band’s classic era, the boys only sound “something like” the Damned.

The punk tunes (“Ignite,” “Second Time Around,” “Love Song,” “Neat Neat Neat” and signature hit “New Rose”) lack the bite they had so long ago. But the more pop-inflected songs (“Wait For The Blackout,” “History Of The World (Part I),” “Eloise,” “Street Of Dreams”) all really buzz. Vanian may dress like an undertaker emceeing a three-ring circus, but his pipes are as clean and rich as ever. Furthermore, with closer “Smash It Up,” the group is subtle, powerful and anarchic: everything that made it the most accomplished, versatile, exciting, and—don’t challenge me on this one—best punk band from the class of ’77.

As he exits the stage, Vanian warms up the audience for the headliners by suggesting we may all be “killed by death.” Only at a metal concert would that be greeted with cheers.

When Motörhead takes to the stage, one senses that the set of an ’80s metal video has come to life: a drum riser towers, the garish Snaggletooth banner seethes malevolence from the rafters, the powerful search lights cast their tendrils outward, and the ubiquitous devil hand symbols reach, ironically, to Heaven.

Lemmy and Co. play a punishing set of their trademark one-two-three  sweaty metal. The band hammers through a series of crowd pleasers: “Shoot You In The Back,” “Stay Clean,” and “No Class.” “Iron Fist” is conspicuous in its absence, but there is plenty gristle elsewhere on which to chew. And if the numbers all sound similar, no one is complaining. Motörhead fans don’t come to the shows for diversity in the songs: They come because—I’m quoting several bleary-eyed fans here—“no one rocks harder.” Indeed, Motörhead is utterly uncompromising. Over nearly 40 years, the group has never sold out, let alone sung a duet with Miss Fucking Piggy. (I’m looking at you, Ozzy.)

As preface to the night’s closer, the pummelling “Overkill,” Lemmy addresses the crowd one final time, paraphrasing a lyric from another one of his songs and repeating his intro at the start of the show. “Don’t forget us,” he implores. “We are Motörhead, and we play rock ‘n’ roll.”