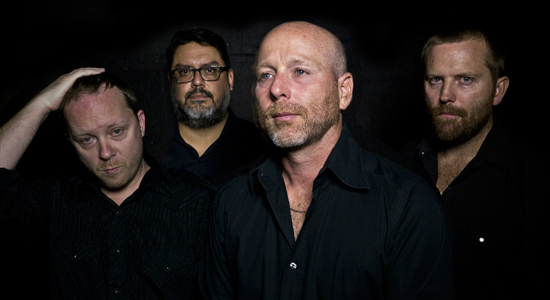 “There was no sense of urgency, no real plan to finish this album,” says Chris Goyer, lead singer of I Love You But I’ve Chosen Darkness, a band that’s taken eight years to follow-up Fear Is On Our Side. “We would work on stuff for a while, then stop, then work on it again. People kind of came and went, did different things in their lives, until we finally committed to putting out an album. A normal band would have had a better work ethic, but obviously, we have no real concept of it.”

With titles like “You Are Dead To Me” and “The Sun Burns Out,” Dust picks up exactly where Fear left off, piling dark atmospherics on top of pained, brooding, impenetrable lyrics about whatever happened to be on Goyer’s mind when the tape started rolling. If it sounds heavy, that’s because Ministry’s Paul Barker produced the album, just like the one before. If it occasionally sounds lighter, that’s because the rest of the band members—Daniel Del Favero, Ed Robert, Ernest Salaz and Tim White—haven’t lost their fondness for modular synths, chorus pedals and looping guitar arpeggios.

“Honestly, with the best songs, we just start playing until we find something that sounds good, and that’s pretty much it,” says Goyer, who thinks of himself as a guitar player who sings, rather than as a singer who plays guitar. “Maybe somebody we’ll have a guitar part or a keyboard loop, and we’ll just start playing. In a room. Together. Whether that’s three of us, or four of us, or five of us. Sometimes, there’s a little more thought that goes into the words or the melodies later, but the more we try to change things, the worse a song typically gets. So, we’re really big into thinking less, playing more and letting whatever happens happen.”

After releasing an EP in 2003, produced by Spoon’s Britt Daniel, and a full-length in 2006, the band members thought briefly about turning pro, but quickly decided they were better off keeping their day jobs. (Goyer runs a software development company. His bandmates also work in tech, and none has other bands to distract them.) Midway through a 2006 European tour, they realized they’d rather be home in Austin, so even though they love to perform, they’ve scheduled only one gig to support the new album.

“There’s no pressure to do anything we don’t want to do,” says Goyer, who plays most of the high-end rhythm guitar parts. “Since the last album, everyone has grown up a little bit, emotionally, behavior-wise. That’s a positive. We’re definitely more laid-back, and everyone’s attitude is, ‘This is what it is.’ That’s fine. We sound better than we used to, and I don’t know if that’s because everybody is more anal, but we sound really good. I know, we spent a ridiculous amount of time on this record. But the time actually spent working was probably comparable to a normal album. We just spread it out.”