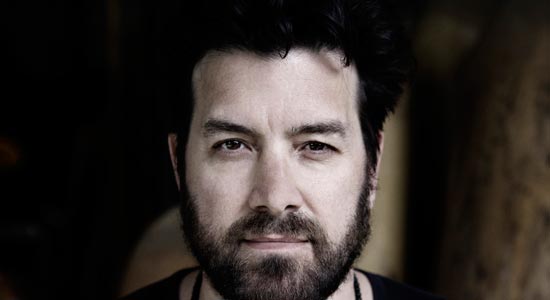 Fourteen years removed from his major-label debut, Bob Schneider is still struggling to be heard. Does he care? You be the judge.

He claims it doesn’t bother him, but you can tell the Jack Johnson thing eats at him a little. Just a month after Johnson’s debut ambled its way into the waterlogged psyches of frat dudes everywhere, Bob Schneider’s Lonelyland was also released on Universal. Almost a decade and a half later, Johnson remains a top seller on the Universal roster. And Schneider, well …

“He got a hit and went on a trajectory that’s crazy, selling millions of records and playing stadiums—and I didn’t,” says Schneider from the back of the 2014 Mercedes-Benz Sprinter that’s home when he’s on the road. “For the past 10 years, I’ve been playing the same clubs and haven’t been able to break out of it … 85 percent of the gigs I play are in Texas. But it’s cool. I can do anything I want, and I make enough money to live comfortably. If I had the success of Jack Johnson, I’d have to do a lot of shit like this interview—which I never do anymore.”

It’s about an hour before a well-attended show at World Cafe Live in Philadelphia. The performance will be loose, good-natured and ultimately a bit bizarre when the so-called “Philly All-Stars”—basically a guy, his wife and assorted friends—take the stage to serenade Schneider during an encore. “They showed up at (a Philly show) maybe eight or nine years ago,” he says. “They were dancing, and I pulled them onstage. They’ve been to every show since.”

So, here’s the deal: Schneider wasn’t raised on the Oahu’s North Shore; he’s never surfed Pipeline; and film school in Santa Barbara was never an option. Born in Ypsilanti, Mich., he was raised mostly in Germany, where his dad, an opera singer, struggled to eke out a career. He studied art for a while at the University of Texas at El Paso before settling in Austin, where he fronted punk-spiked groove outfit Joe Rockhea, and the sorta-similar mid-’90s band Ugly Americans.

There are similarities between Schneider and Johnson. The two share a rubbery, granular vocal delivery, rugged good looks, an ear for melodies that stick (for better or worse) and an acclivity for absurd song titles (Schneider: “Jingy,” “Capn Kirk,” “Penelope Cruz”; Johnson: “Bubble Toes,” “Banana Pancakes,” “Washing Dishes”). Both have kids. Schneider has a nine-year-old son from his first marriage, and he’s newly engaged. He once dated Sandra Bullock (prior to her disastrous run-in with Jesse James).

That relationship loosely coincided with the official launch of his solo career. At the Austin release party for Lonelyland, the men’s room was buzzing over numerous “Sandy sightings.” (I should know—I was there.) A clear-eyed Schneider, to his credit, refused to be consumed by the hype. Sober since 1995, he’d partied enough for two lifetimes by then. “It’s weird,” he recalls of that time. “It really doesn’t feel that much different now than it did then. It’s kind of like Groundhog Day. I’m still writing songs; I’m still putting out records; I’m still playing the same clubs and with a lot of the same guys—I’ve played with (bassist) Bruce (Hughes) for 20 years.”

Seven more proper solo albums have followed the promising Lonelyland. A good number are wildly inconsistent, and two (2011’s A Perfect Day and 2013’s Burden Of Proof) are pretty close to great. Most encouraging, for him and for us, is that Schneider, now 49, has made some of the most honest and sophisticated music of his career over the past few years. And his habit of larding his releases with throwaway tracks and goofball hokum has mostly gone by the wayside.

All that could change with his next project. For now, the plan is to release a series of EPs throughout 2015, with the first one coming this month. All will be limited editions, with cover art created by Schneider, who’s come a long way as painter in recent years.

“The thing that works best for me is to keep things really eclectic,” he says. “I just did a show in Austin where I played 12 hours, but with no bullshit. The set list was, like, 200 songs. It would’ve gone on for like six days if I’d played all of them. But then there would’ve been a couple days of some pretty mediocre tunes.”

The only album Schneider played in full: 2001’s Lonelyland.