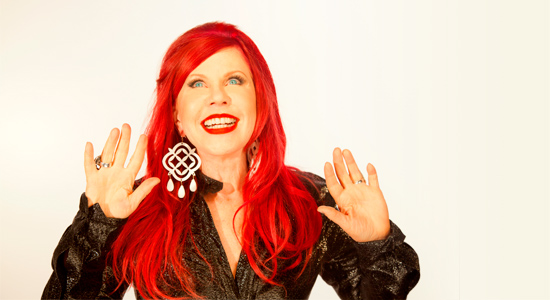 Kate Pierson released her debut solo album, Guitars And Microphones, in February. You can’t help but wonder what took her so long. She’s been the toast of Athens, Ga.’s party-balling B-52’s since 1976, and that’s pretty much it. Not that her union with Fred Schneider, Keith Strickland and the Wilson siblings hasn’t kept her busy—the B’s still tour and release new music. And sure, she’s recorded duets with R.E.M. and Iggy Pop, and played a part of Japan’s NINA for kicks (plus, she co-owns two Kate’s Lazy Meadow hotels with her partner, Monica Coleman). It’s just surprising that she hasn’t had much of a yen to make solo music until recently. With the help of Sia and the Strokes’ Nick Valensi, Pierson scratches that sudden itch with Guitars And Microphones, and may even have newer, solo songs to follow.

I didn’t realize that you were born in Weehawken, N.J. Any childhood stuff stick out?
I am a total Jersey girl, and was raised there until I was eight, then moved to Rutherford after my grandmother died. I was there through high school, so I have those vivid memories, but once I left Jersey, I never came back. There’s not much family left to speak of, but who is remaining from Jersey all moved to Florida.

So, what made you want to become a mini-chain motel magnate? You’ve got one in the Catskills and one in Joshua Tree.
The first one was a roadside hotel built in 1952. Really run-down. The rooms were depressing and gray. The land, though, was beautiful, with a lovely creek and goldfinches flying around. It was a real fixer-upper. Monica was a friend, helping me get it together. The more we worked, the more real it all became. Decorating was a blast, and the whole project was just fun, certainly nothing I ever dreamed about. The Joshua Tree location happened when we had mudslides here and had to get everything redone, so we found someplace in the desert to live while the Catskills location got rehabbed.

Throughout your history as a musician—and, of course, most of that means the B-52’s—were there songs you wrote for yourself? Songs that didn’t fit the B’s?
I first had a band in high school called the Sun Doughnuts. We wrote our own songs—protest songs, civil rights songs. I kept doing this until I got to the B-52’s. I really always wanted to be a girl singer, but when I got to Athens, I focused on a back-to-nature thing where I raised goats and such.

I’m just waiting to see how this ties into Fred.
Well, when we got together with the rest of the band, our writing style immediately focused on jamming, and songs being written from the evolution of those jams. We’d play. Fred, I and Cindy would come up with lyrics. It was a very collective mentality, with very few exceptions. There wasn’t room for anyone just coming in with their own songs.

So, you just didn’t or couldn’t write without the band?
Couldn’t really for the longest time. Something inside me just shut down. Then we sort of stopped that for a minute—after (1986’s) Bouncing Off The Satellites, where we tried writing on our own. It was very sudden, as if writing was thrust upon me. Then the band took a big break in the late ’90s, and I had this great opportunity to go to Japan and work with the producer of the Plastics on this NINA project. We didn’t speak each other’s language and had to work with an interpreter, but I really had the floodgates open for me. It was huge in Japan; I just wish Sony would have released it here. From there, I genuinely began writing on my own, but the B’s management discouraged this. There were contracts, we were touring non-stop, plus we recorded (2008’s) Funplex, so again, my writing for myself went on hold. It was overwhelming.

So, no time for Kate?
The B’s are a family dynamic. You can’t leave it. Look, it was my own mental state. No one from the band held me back. I didn’t give myself license to do that. It wasn’t until we broke full-blast touring for a year that I began thinking about my writing again. Sia is a friend of ours—this is before she began writing for Beyoncé and Rihanna. I wrote with her; I was writing with different people. Suddenly, it seemed to flow better. It was easy, positive. Which is how the album got made.

What do you think you require then to make a perfect Kate Pierson solo song?
With the B’s, there’s too much talent. With NINA, it was easy collaboration. I don’t know. Maybe the feeling that I don’t have to push to get heard? I definitely want it to be different from what I’ve ever done, despite having the similarities in my voice. More autobiographical, too, touch on subjects I care about, like addiction and transgender people.

So, before you got to Guitars And Microphones, were there things that you knew in advance that you wanted to bring to the table?
No.

OK.
Well, only because it was all very spontaneous. That’s the beauty of writing songs—at least that’s what I learned now. You just do it. There’s the pop framework of verse and chorus, but that’s it. Then you work with Sia, and she really cuts to the chase. I jotted down titles, then some lyrics, collaged that together with the melodies, Sia shaped those melodies, and that was that. From there, I was able to focus on elements of my life such as growing up and losing friends, like on “Guitars And Microphones.” Plus, I always wanted to play guitar on a record, and I finally did on this one. I used to play guitar while sitting on my dad’s knees. It was a great feeling reliving that.