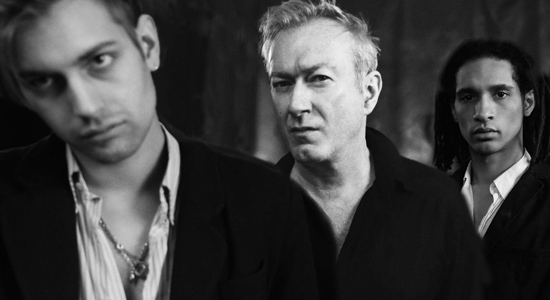 Veteran English guitarist Andy Gill has a relatively simple work ethic that’s guided him for years, ever since his legendary post-punk outfit Gang Of Four burst onto the staid scene with its jagged, jarring Entertainment! debut in 1979. “There are loads of bands that can chuck out the same album, year after year,” he says. “But that model is just not for me.”

The group’s quantum leap forward to 1982’s more danceable third album, Songs Of The Free (featuring club smash “I Love A Man In Uniform”), might have clarified that tenet already. If not, the latest Gang Of Four record surely will—the aptly dubbed What Happens Next, Gill’s first after the departure of longtime vocalist Jon King, who returned to running his advertising agency after 2011’s Content.

Gill’s angular filigrees and sometimes static chords anchor Next. Especially on the guttural “Isle Of Dogs,” a punk-spiked (and Gogol-inspired) “Dead Souls” and the scratchy, squealing “Where The Nightingale Songs.” But the name of the game is collaboration now. German composer/actor Herbert Grönemeyer adds a Bowie-ish vocal flavor to “The Dying Rays”; the Big Pink’s Robbie Furze croons a funky “Graven Image”; Gail Ann Dorsey puts a soulful topspin on a sinister “First World Citizen”; and Kills/Dead Weather banshee Alison Mosshart snarls across two blatantly bluesy tracks, “Broken Talk” and “England’s In My Bones.” The rest are intoned by a new permanent frontman—John “Gaoler” Sterry, who Gill initially hired just to sing his demos.

“I don’t think that there are any rules that say you’ve got to stick to the same bunch of people, or you’ve got to be the same band forever, because otherwise you’re not authentic or something,” says Gill, who just turned 59. “It’s a really misplaced idea of authenticity that the same bunch of people that was in a band back in Year X will remain that same bunch, 30 years later, and maintain that same sound. Like that awful British band Status Quo that plays that weird, 12-bar rock ‘n’ roll, and that’s your characteristic sound and you’ve got to stick to it.” He snorts derisively. “All that stuff is total anathema to me. So, when Jon pulled out, I thought it was a good time to try out working with a few other people.”

Over the years, through Gang Of Four’s on-again/off-again career, Gill stayed busy with other projects. He produced several bands, composed music for TV commercials and BBC television soundtracks, and appeared on a show called Studio In Session, which documented his production techniques with three different groups—Hard-Fi, Cage The Elephant and the Kills—and was where he got to be good friends with Mosshart. She was one of his first invitees, once he’d hit upon his What Happens Next cameo concept. But he tries to keep outside assignments to a minimum.

“When you get into doing albums, like your own Gang Of Four thing, it’s very all-encompassing,” he says. “And at a certain point, you think, ‘If I don’t concentrate on this, I’m never going to get it finished.’ And I’m not the fastest person in the studio, either, so you really do have to stop and say, ‘I’m going to focus on just this and give it my full attention.’”

Which partially explains King’s exit, he adds. Which Gill had anticipated for a while, even when the original members all reunited for tours in 2007. “You can’t do this music stuff unless you’re putting 100 percent into it,” he says. “You have to be prepared to work long hours and not just like it—you have to love it. Jon had been around for a while over the decades, and sometimes he was really up for it, and other times really not up for it. So, that particular parting was probably long overdue.”

Gill told his old chum that he would be maintaining the Gang Of Four moniker, with the roster now including bassist Thomas McNiece and drummer Jonny Finnegan. King understood. Gill even chose to make Next a concept album of sorts, revolving songs around a dystopian view of the cultural melting pot that is his hometown, London. Which exemplifies another of his pet theories: Change is good. “Because it does give you a certain amount of freedom to do whatever you want,” he says. “To just do whatever you want and get on with it, really.”