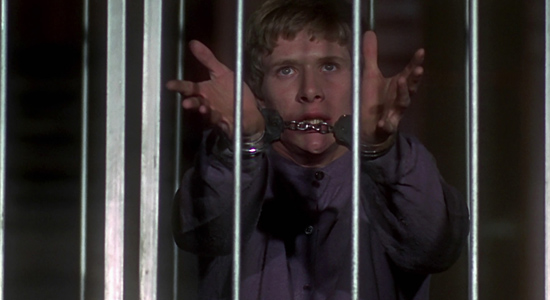 Peter Watkins’ Privilege hit the jackpot casting Paul Jones as Steven Shorter, an idolized pop singer from the near future whose every move is carefully scripted by the British government and the Church of England in order to mold the country’s youth into an easily controlled entity. In the early ’60s, Jones actually turned down Keith Richards and Brian Jones when they asked him to be the front-man of their start-up rock group. They would eventually land Mick Jagger. Paul Jones joined Manfred Mann, instead, just in time for the British Invasion, although acting was always his first love.

After an early period when Steven’s stage show consists of the singer being manacled, beaten and caged by the police, his bleeding body worshipped by screaming young girls everywhere, the board of directors who manipulate his every move decide it’s time for a new direction: total conformity.

As Steven gazes out from the rooftop balcony of a London office toward a sprawling block of high-rise council housing, one of his handlers whispers hypnotically into his ear. “There are millions of little people down there, Steven. We must be quite clear in our minds about one thing: that the old liberal idea that given enough education these people will grow into self-aware, creative human beings is nothing but an exploded myth. It can never happen. They are stunted little creatures with primitive emotions that are dangerous. They’ve got to be harnessed, guided. We’ve seen this happen over and over again for an evil purpose: Germany, Russia, China. You’re our champion, Steven. They identify with you. They love you. You can lead them into a better way of life, a fruitful conformity.”

Steven needs this periodic reaffirmation of the grand scheme. Being its linchpin is beginning to weigh heavily upon him. Dining one morning in the lush garden of the country home of Andrew Butler, Steven, instead of eating, nervously whittles away with a table knife at the hard crust on his bread. “Steven, may I say how delighted we all are to have you with us today,” says Andrew (William Job). “Everybody at this table will join me in wishing you every success for tomorrow night,” he adds, toasting Steven’s new-direction concert with a glass of Chablis. “I-I think I’d prefer hot chocolate, instead,” murmurs Steven nervously, an unheard of deviation from the norm. “You’d prefer what, Steven?” asks Andrew. “I’d like some hot chocolate. You’d like some too, wouldn’t you?” Steven asks the woman seated next to him. “Well … OK … yes,” she says, not daring to choose otherwise. Andrew quietly says to the butler, “Hot chocolate for everyone, please, William.”