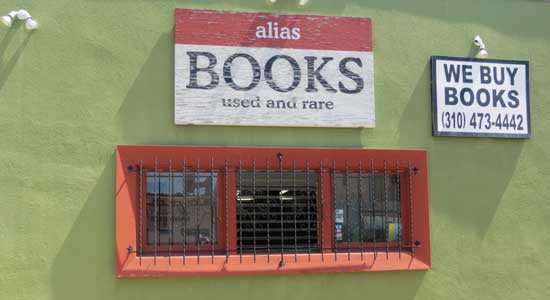 Edwards: Rediscovering the used bookstore … I thought they were all gone. Shamefully, Amazon had become my bookstore, but then recently I wandered into Alias Books on Glendale Boulevard in Atwater Village, Los Angeles (electrified by a Cortado and Financier sugar rush from Proof Bakery across the street). I was greeted by an attractive, topless, full-breasted brunette reading Ulysses; it was only a photograph on the wall, but I readily absorbed and understood the message and there was no turning back. It’s not a big store, but they curate their selection well. I’ve been there four or five times now and I’ve never left empty handed and never found myself at home with a dud. Finding unknown gems is easy. Like Selected Longer Poems by A. R. Ammons, a writer from the ‘50s, ‘60s, ‘70s I’d never heard of but instantly resonated with. Here’s an excerpt. If you don’t like poetry, go fuck yourself:

… Through the reeds somewhere, as by a
Paddy or ditch in the head,
Wind burrs
a leaf: the woman flutters,
Her grief absolute and
Not a mystery:
How can I know I
Am not
Trying to know my way into feeling
As
Feeling
Tries to feel its way into knowing:
It’s indifferent what I say: the motions
By which
I move
Manifest
Merely a deeper congruence
Where the structures are…

(From Pray Without Ceasing —A. R. Ammons)