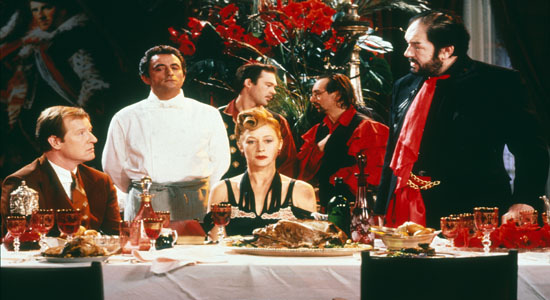 Scott: I’m looking to be entertained after hours and decide on a movie I haven’t seen since we recorded Fantastic Planet. The Cook, The Thief, His Wife & Her Lover pops into my skull. First, I forgot how much I absolutely hate the main character, played by Michael Gambon. A violent, cruel and mostly annoying mobster who won’t shut up or stop hurting people throughout the entire film. The other main character is the always beautiful and talented Helen Mirren, who cascades through the film, endlessly wearing gorgeous costumes from one lush scene to another. This is one of the most uniquely designed films I’ve ever seen, and the colors and endless long dolly shots further place it in a category of visual stunning of its own. A classic love trinagle and ultimate revenge film that if you you haven’t seen, you should, immediately.