I Can’t Stop is the latest release from the legendary BoDeans, who started making music together more than 30 years ago. The band will be touring throughout the rest of the year, but in the meantime, frontman Kurt Neumann, multi-instrumentalist Sam Hawksley and drummer Kenny Aronoff will be guest editing magnetmagazine.com all week. 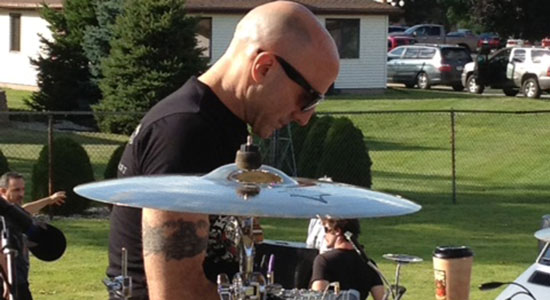 Hawksley: I almost fell over when I turned up for my first sound check with the BoDeans. I looked over and there was Kenny. I had no idea who was in the band, I hadn’t asked, I was too busy learning 25 BoDeans songs in four days. I certainly didn’t expect to see one of the world’s premier drummers sitting on the throne (the drum stool; not that throne). Kenny has been playing with the BoDeans almost since the beginning, playing on their hits like “Closer To Free” and “Good Things.” I’d been a big fan of Kenny’s drumming since I first heard him on John Cougar Mellencamp’s records—he’s a powerhouse. He’s played on more hits than I’ve had hot breakfasts. It’s funny sometimes, we will be on the road having lunch at a cafe and the radio will play a Mellencamp song, then “Blaze Of Glory,” then Belinda Carlisle, and you think, “Wow that was a Kenny Aronoff triple-play.” I call him Kenneth, I think he hates it, but I’m cheeky. No one rocks like Kenny. His playing on the new record, I Can’t Stop, is fantastic.
Video after the jump.