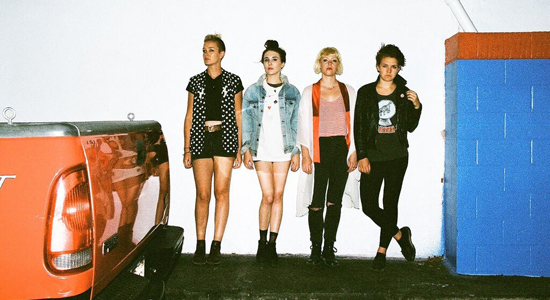 The prolific Brits of PINS purée shoegaze, psych and pop

“I consciously waited to move away from the post-punk thing; this one is more trippy, noisy pop,” says PINS vocalist/guitarist Faith Holgate with a self-assurance that belies the youth of the Manchester-based quartet. The band originally coalesced around the mandate of making a statement as an all-female group instead of being the token chick who gets mistaken for a girlfriend or groupie. Its brief four-year existence has been productive, producing an EP, full-length and an exhausting tour schedule.

“It’s been a few years for us,” says guitarist Lois McDonald. “We’ve been writing and playing non-stop. We have a really supportive label, Bella Union, and a great manager who works non-stop.”

“It doesn’t feel fast to us at all,” says Holgate. “We always complain about how slow everything is. We want the world on a plate, now! It’s gearing up, though; with the new record coming out, I’m excited.”

Holgate and McDonald are referring to sophomore full-length Wild Nights, which takes definite steps away from the band’s initial approach toward a bigger embrace of its Jesus And Mary Chain, My Bloody Valentine and Hole influences. It’s more psychedelic swirl and poppy jangle than rudimentary bash ‘n’ clang, and a mature move made during a comparatively truncated window of time that thusly packs a seasoned punch because it screams, shouts, caresses and coos with purpose, while never forgetting its roots.

“Mostly, I think we wanted to do it somewhere we could immerse ourselves in what we were doing,” says McDonald about recording at Rancho De La Luna in Joshua Tree, Calif. “We wanted to work with a producer to develop the ideas we were having as a band, and try more instruments, different guitars, drums and bigger vocals. I think playing more and more shows made us more confident as musicians, which allowed us to push ourselves more during the recording. We were less concerned about playing every note right and more interested in making something that sounded interesting.”

“Recording Wild Nights felt really good,” says Holgate. “Having (producers) Dave (Catching) and Hayden (Scott) work on it with us helped us be free. We experimented, we left in the mistakes if they sounded good, we drank wine and just added whatever felt good at the time.”