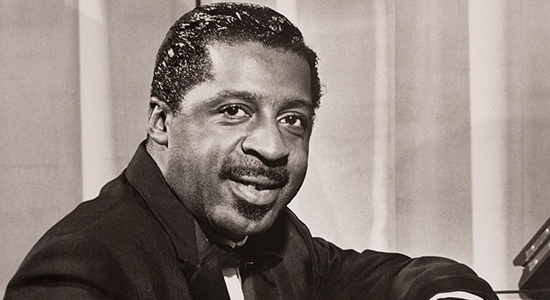 Sixty years ago today, explosively melodic jazz pianist Erroll Garner lit a fire in a Carmel By The Sea, Calif., concert hall that still burns brightly today. The highlights of that memorable evening were released at the time by Columbia Records, and sporting a cover photo of a young woman on a rocky cliff as Monterey Bay’s waves crashed all around her, Garner’s Concert By The Sea became one of the best-selling jazz LPs of all time.

Backed that evening by bassist Denzil DeCosta Best and Eddie Calhoun on drums, Garner ripped through a set composed of great American songbook classics (“I’ll Remember April,” “April In Paris,” “Where Or When”) and a few pop hits of the time that have now joined that illustrious company (“Teach Me Tonight,” “It’s All Right With Me”). It was addictive music that would reach out to a young boy. My old man brought home that longplayer, and little did he know that, years later, his oldest son would wear that vinyl out as background for occasional teenage poker parties.

Now for the exciting part. Sony Legacy has unearthed a tape containing the rest of Garner’s concert that evening—an amazing 11 previously unheard tracks—that have been re-sequenced with the former album to create The Complete Concert By The Sea, exactly as it was performed that night.

Garner, hailing from Pittsburgh and standing only five-foot-two, had to place a book on the piano bench to feel comfortable at the keyboard. Once there, he became a musical titan. The heroic moments flash by as Garner’s dancing right hand and the explosive chords punched out by his left re-invent everything he touches. Completely self-taught, Garner has the keyboard mastery of any classical pianist you’ve ever heard.

“Spring Is Here” rolls over you like a gentle breeze. “I’ll Remember April” is the first number in the patented, rollicking delivery style he’s best known for. The complex, squirming melodies dance around the simpler chordal song, sometimes colliding head-on in pure glee. “The Nearness Of You” never sounded so lovely, caressed by the Garner magic that fills the room.

Then there is “Where Or When,” a song no one could ever play any better. I’ve wallowed in its up-tempo madness a thousand times, and it sounds as thrilling and fresh today as it ever did. Taken at a breakneck pace and caressed by Garner’s delighted grunts, the darting improvisations inspired by the familiar, rising melody ignites from the launch pad, and there’s no stopping it until it explodes, once more, in the last two choruses—daring you not to play it again.