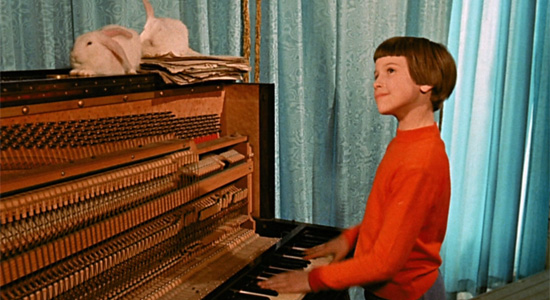 Zazie tries to keep its focus on the frantic exploits of a 10-year old girl as Louis Malle’s 1960 caffeine-laced, jumping bean of a film finds our heroine arriving in Paris with her mother, who immediately departs at the train station for a 48-hour liaison with her new boyfriend. Zazie (Catherine Demongeot) has been left in the expert care of her uncle Gabriel (Philippe Noiret), as if that matters much. He couldn’t tie this kid down if he employed a platoon full of Texas rangers and green berets. She wears an apricot-colored mock-turtleneck sweater in almost every frame and has a Beatle haircut three years before even they had them. She displays her gap-toothed, Huck Finn-like grin every time she smiles—and she smiles almost nonstop. She also swears like a sailor (or at least a Sea Scout).

Some of the movie is speeded up a la those silent films they showed in television’s early days. Some of it is shown at normal pace, but even then this movie makes the viewer’s head spin like the laughing stuffed clown at your nearest low-budget carnival. Much of it is shot from a mini-helicopter bobbing and weaving 20 feet above the action. Not really, of course, since nothing like that existed 55 years ago. Instead, Malle probably hired camera men willing to hang upside down from trees or balance precariously from Paris rooftops to get these shots.

One sequence finds our girl and her uncle careening down the spiral staircase from the top of the Eiffel Tower at a vertigo-inducing clip. Another has Zazie, unrestrained, standing in the back of a car that has been stripped down to its bare frame as it bobs and weaves through the notorious Paris traffic at a breakneck pace. As she tries to escape from her uncle by dashing through an open-air produce market, Zazie barely dodges an old lady who’s holding a large plaster statue of the Venus de Milo. Uncle Gabriel, in hot pursuit, barrels directly into the woman, dashing the crockery to pieces on the pavement.

It seems that all Zazie really wants to do is ride around all day on Paris’ storied subway system, Le Metro, but the underground conveyance is closed due to a labor dispute. Even when things slow down for a bit as uncle Gabriel takes her out to a lunch of mussels and potato fritte, she’s soon back on the run. Uncle Gabriel and his pal who drives an open-air taxi take turns mis-identifying famous Parisian landmarks—the Pantheon, the Invalides, the Gendarmerie, the Madeleine—as Zazie pops up from the back seat saying, “Hey, uncle, when you spout this crap, is it on purpose? Pull my leg, willya. You’re just a pair of old farts!”

But that’s our Zazie: Catch her if you can.