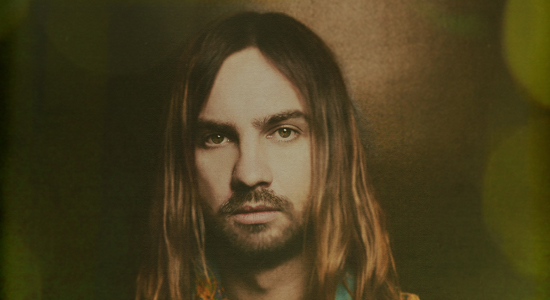 Kevin Parker is no less of a lone wolf on Tame Impala’s newest album, Currents, than he was on Innerspeaker or Lonerism. Yet, this time out, he’s focusing on more active (still melancholy) aspects of the isolation he’s felt/written about in the past. The moving parts of disgust and bitterness are found in the heartbreak within the record’s electronic framework; a sound with its guitars tuned down and the light spattering psychedelia of his previous albums wiped clean. Currents, then, is that: a new Parker, now.

Dog man or cat man?
I used to be a cat man—still love them—but my girlfriend is a dog girl and I dig walking her dog, so I’m in the middle. I’d probably get a dog before a cat at this point.

Last time I saw Tame Impala, you were touring with Flaming Lips and Sean Lennon’s Tiger band. That sounds like a hoot. Were you shocked when Lennon told you that you sounded like his dad?
That whole thing was like a festival atmosphere—the habitual drinking and such. The Sean thing? I hate to get into a big thing about it. I get the feeling it’s just something he said o the top of his head one night. I mean, wow, that’s his dad.

Let’s talk about someone else: Mark Ronson, who had you on his new album. Tame Impala is one of his favorite acts. You don’t do a lot of guest spots. How was that hookup? What was the takeaway?
He was fun to work with, if for no other reason than he’s got all these other artists around him—Bruno Mars included. He gathers an amazing team—musicians, singers, authors—and uses them like an orchestra, just conducting. Brilliant minds that in any other situation you’d be worrying about the old “too many chefs spoiling the broth” cliché. Mark had this great way of bringing people together and bringing out the singular thing in each of them—but shows there’s no one way to do things. He finds inspirations in groups of people, and that provides another layer. Collaboration is his instrument, I think. None of that reflects on me and the way I make music on my own, but I see it.

As a person now, do you like your own company more than you like the interaction of friends?
I appreciate both these days. I do need time alone to allow thoughts to rattle around my head—for instance, that’s the only time I hear melodies—but I do want to connect with people. That’s what Lonerism was all about, just that wanting to connect.

That’s fine for Lonerism, but what about Currents? Do you think you have the goal you set out for?
There’s not a story per se. I’m not playing one character, but I do think there is a realization. The feeling that we’re not so disconnected is there. Definitely.

You’re in this, I know, but are the other characters pieced-together facsimiles? Fictions? People you’ve observed? Are they closer to you than that?
There’s definitely something autobiographical about Currents. I don’t know if I would be able to pull such meaning from subjects more distanced. It wouldn’t be as meaningful to me. Then again, I can always run out of true stories.

Woody Allen just said that, given the chance, he would remake every one of his films. Even his newest. Considering where Currents goes sonically, how different it sounds than anything in you catalog, think you would you change anything?
That’s a hard question. I have to force myself to say no. There’s always that temptation, and I know there are flaws, but I like accepting it that way. People have done things with and people have fallen in love to my records. Luckily, I’ve gotten better at making records, but I think I like what each of them does in their present state. I can make them sound better, but I can hear them for their romantic crustiness. I can hear the romance in the ramshackle way in which they’re put together.

How did the new sound become a thing— your thing for this album—in the first place?
I’ve always loved electronic music and wanted to make more of it; I just had to find a way to make it mine. Air. R&B things that use electronics. I probably listened to that more than, say, the sort of music I was making at the time, but I’ve never really had a way of mixing it into my music, my songs—or had the courage, really. To bring those two sides of me into one sound. For instance, I’ve always been into Michael Jackson, but I never found a way of expressing that influence.

Courage—that’s a funny way to think of it. I don’t want to analyze every word you say, but why that?
I think because eventually you have to stop second-guessing what you do, not be careful anymore. I think I have been too careful in the past. Before I took a next step, I self-analyzed every reason why and why not. It’s a blessing and a curse, really, because you do have a filter—what to leave in, what rubbish must come out—but it also stops you from making brash decisions, finding the wild and crazy, the joy of things. I think it takes courage to say fuck it, to dodge the consequences.

What motivated “Gossip”? It felt very Bowie Low to me, which is what—just an album of interludes, really.
I love interludes on an album, a thing that connects everything, comes out of nowhere, but act seamlessly. “Gossip” is its own little thing.

Are you a guy who keeps notes/letters from your past, or writes down volumes of lyrics? Currents come from a deep emotional wellspring that I imagine you ruminated upon somehow.
I’ve got that dreaded book, but I’ve never really written down a whole thing in my life. I just scribble some things down, but mostly just put what’s coming out of my head onto tape or whatever, attach  them to a melody and hope they stick—and that I at least remember them all when I’m onstage.