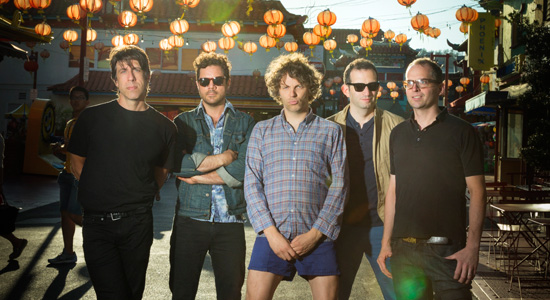 The saga of !!! (or Chk Chk Chk, or whatever clicking, clacking noise you can muster) is as long and cluttered—yet ultimately straightforward and simple—as its music. Nearly 20 years old, !!! was the dance-punk California creation of singer Nic Offer, guitarist Mario Andreoni and a handful of throwaways from Black Liquorice and the Yah Mos. With its first album in 2000, !!! beat other skittering, chanty rock-rhythm ensembles such as the Juan Maclean and LCD Soundsystem to the punch. Still, somehow Juan and James Murphy’s LCD got the headlines and hits, and had the stronger profiles. To an extent, !!!’s rock-’em-sock-’em brand of punk-funk may have been sharper and shard-ier due to the DFA label connection to NYC and Rhode Island. The funk is harder on the East Coast, the contrast between the airy chill of the band’s melodies against the heat of its catty grooves more clearly delineated. (Sorry for the weather report.) Which is why As If kicks a bit more ass than its five studio predecessors, as the !!! crew exists more as a New York City-based group now, with a greater focus on pumped-up pulses to go with the sinewy melodies. There’s less of a floating, jive-y jam-band sound, with the oblong disco of “Freedom! ’15,” the party-ball pop of “Bam City” and the salty R&B house-music mix of “Sick Ass Moon” offering contrapuntal melodies that are Moebius-stripped to tight-ass perfection alongside biggish beats. As If offers something close to perfection, as far as !!! goes.