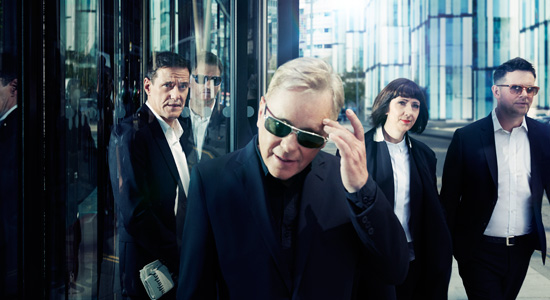 “Drama? What drama? We’ve not had any drama; we’ve had a great three years. It’s been far from drama, to be honest. It’s not always been perfect—that would be unrealistic—but for the most part, it’s been great.”

Bernard Sumner, erstwhile Joy Division guitarist, once and future leader of New Order (thus, logically, the closest thing you’ll get to a pop deity these days), is discussing Music Complete, the latter’s first album of new material in 10 years. Sumner is bone-dry and measured in his responses (as opposed to drummer Stephen Morris, who’s witty, amiable and vaguely bemused), but becomes animated when MAGNET has the temerity to suggest that there might have been a degree of drama in the New Order camp of late, if only due to the departure of bassist Peter Hook and the subsequent, very public and very messy accusations that were splashed across the music press. But more of that later—for now, Sumner’s having none of it, and is keen to stress how relatively painless it was to make the new album.

The very fact that Music Complete was completed at all seems nothing short of a minor miracle. After all, it’s not that long ago that Morris was telling The Guardian that he saw no future in New Order, that it was all over. So, what happened?

What happened was that former New Order video producer and Factory USA boss Michael Shamberg became severely ill, and the band—reunited with keyboard player Gillian Gilbert—came together to play benefits in order to cover Shamberg’s medical costs. “And it went well,” says Sumner. “No one seemed to mind that there was no Hooky, and the thing is, if you’re in a band, the next thing you do is write new stuff, which is what we did.”

The result is Music Complete. It’s a far more keyboard/synth-heavy offering than the last few albums—a deliberate decision, says Sumner, largely at Gilbert’s suggestion— and features contributions from the likes of Brandon Flowers, La Roux’s Elly Jackson and Iggy Pop, who comes on suitably sonorous and preacher-like on Sumner’s poem “Stray Dog.” Guests aside, it’s still a quintessentially New Order album, with all that entails: perfect pop that frequently skirts the fine line between the sublime and the ridiculous. There’s echoes of Giorgio Moroder, Yello and Chic. There are propulsive, turbo-charged muscular grooves, sleek and slinky and downright sexy (“Singularity,” “Plastic”). There are moments of transcendent brilliance (“Nothing But A Fool,” “Academic”) where the band takes the chilly robotic aspects of electronic music and tempers that with the melancholy and big-hearted romanticism that’s long been a hallmark of New Order at its best.

There are also, it has to be said, a few outright clunkers, and at times there’s the nagging sense of a band chasing its own past. It might not reach the dizzy heights of, say, Technique, but Music Complete is still far more compelling than anyone might have reasonably expected. As for the die-hard dissenters grumbling about the absence of Hooky and his patented low-end theatrics? Don’t expect much sympathy from the likes of Morris.

“Well, was it New Order without Gillian?” he asks. “Nobody minded that. Would it be New Order without me? Would it be New Order without Bernard? I can understand why some people feel like that; there’s always going to be people who say, ‘Well, that’s wrong.’ You just have to get on with it. There’s no answer to that, really. I mean, we could have gone, ‘Oh, there’s no point going on,’ but that seems daft, really, after you’ve gone through your lead singer exiting this mortal coil and picking yourself up and going on. It just doesn’t seem right.”

Sumner, for his part, seems far more sanguine about the whole messy a air; he “doesn’t want to point fingers,” but admits it was a lot less tense in the studio minus their former bass player. (“When we were together with Hooky, it was like mice in a bed.”) He’s eager to point out the return of Gilbert and her contributions. “Was she a calming influence?” says Sumner. “No, no, I wouldn’t say that. She’s very much a co-collaborator.”

As for Morris? “What difference did it make? It meant me tea wasn’t on the table when I got home from work! [Laughs] Oh God, that’s a terrible thing to say. She’s going to give me a right slap!”

More than anything, it remains a thing of wonder, just having New Order still around. They’ve been through death, drugs, drink, near bankruptcy and label collapse—and came through with both their sanity and sense of humor intact. Theirs is a story of high drama, farce and tragedy, yet they remain imperious, inscrutable and dryly, almost professionally Northern, with a built-in bullshit detector that would put lesser talents to shame. They have, in short, whether they like it or not, become British national treasures. Which is something that Sumner can live with.

“It’s been a rocky road; that’s for sure,” he says with considerable understatement. “It does make for an interesting story—I’d have preferred it to be a little less interesting, to be honest. But I’d rather be called a national treasure than shit.”