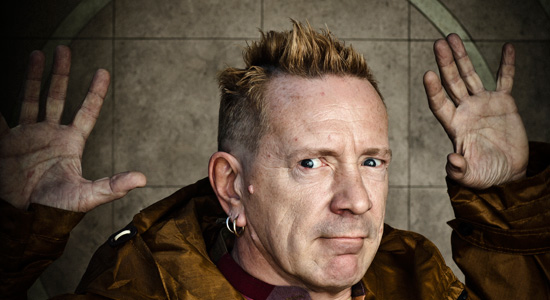 John Lydon doesn’t need an introduction. A wind-up works, as the iconic punk (Rotten, late of the Sex Pistols) and post-punk (the ongoing-and-growing Public Image Ltd, or PiL) avatar is saying, singing and writing more than he has since his late-’70s start. While a second, more deeply personal and probing autobiography is now out, digging into physical ails and remarkable joys in Anger Is An Energy, PiL has just released its blabby new album,What The World Needs Now…, and an oddly comic single and video, “Double Trouble,” where Lydon presents the travails of wedded bliss through a handyman’s labor.

You’ve got one song on the new album, “Corporate,” which is about the prison of company hell, and another, “Shoom,” that seems to be about the futility of succeeding. You’ve been livingly noncorporately off-the-grid for a minute. What’s bugging you?
It’s the franchising of individuals. We’re still being flooded by mall-style clothing and ideologies. All of these attitudes are soul-destroying, wouldn’t you say? A sad example is how there’s so much great rap music, but the cottage industries around it are so sad. Nike is the biggest earners, yet their goods are not well-made, in my mind. I’ve had Nikes in my time, and they’ve fallen apart over the course of a year. In fact, they rot from the inside out.

John, a lot of things rot from the inside out.
I don’t, apparently. These are barbs against the record industry and entertainment complexes. No one should stifle you from the joy of your life. Corporate thinking is always the enemy. As for “Shoom,” well, that’s the first thing you hear on that song … a shoom from mucking about on a drum machine. The lyrics, however, are from the point of view of my father, whose sense of comedic timing was impeccable. I used to watch him from the time he came in the front door to when he was in the pub, all with that Irish accent of his. He was very dry and ironical, so “Shoom” is an homage to him and his point of view.

Were you close with your folks? Are they a natural part of your conversation outside of your songs and the book?
Well, you have to remember that I lost my memory for like four years being in a coma from having meningitis. For years, I didn’t know who they were, so when my memories returned, I wasn’t ever gonna let them go again. It’s nothing to take lightly, an amazing hardcore thing. Your personality, the core of your being; everything around you can be so quickly taken away. Luckily for me, it wasn’t permanent, but I was pissed.

One of the therapies that the doctors used was to harness your anger, yes?
Yes, to use anger as an energy. I slowly but surely recovered my memories, and I’ll never lose them again, I hope. That would be my worst nightmare. To endure that utter complete loneliness all over again, to not know that you belong to anybody—my love of humanity, my clinging to the world of other human beings would be lost. I know how quickly it can be taken away.

Would you say that you are a man surprisingly possessed of joy?
It’s not a surprise to me. I love life, but yes—I am nothing but gleeful. Sorry if it came off as something else, but no …

So, you’re a feeling man. Tender, even. Were your surprised to be so vilified at the start of your career? The Pistols, early PiL—you were demonized as an antichrist anarchist.
I was discussed in Parliament. Ah, institutions are foolish at heart. They are literally headless chickens running around in circles. If I could make that machine cease, it would be well worth any headache I’ve endured. I don’t need to get involved in pomp, circumstance and irrational attitudes.

Your ideology when you started PiL was to be self-maintaining. Has that carried on with this group (drummer Bruce Smith, guitarist Lu Edmonds, bassist Scott Firth)?
Be outside of the shit-stem so that we couldn’t be dragged down by it—that’s always been the goal. At the start, we were still attached to the label system. They were controlling purse strings. Certain band members back then smelt money, and that led to insider problems, but it was a good idea; one that I see coming together now, because all of us respect each other and are eager to work with each other, and absolutely love what we do. This new album shows that. We can’t all be perfect plumbers or perfect singers, but you do have to try…

Do you vote? Are you fully an American citizen by this point?
Yes I do, and yes I am. Very happily, too—a great idea, that. I got my membership. Made me very proud.

Are our politics funnier than England’s?
No. England is much more false and petty. They are absolutely still trapped in regime, some being thousands of years old. That club is a stranglehold that is very hard to achieve anything with or through beyond what you were born in or to. That’s a punishing regime—a form of enslavement. Here, you’re still young and there’s still many levels of hope, mostly personifi ed by our president and Obamacare. That is so particularly new American, and I’m more than happy to be here for that. In my mind, any society that doesn’t take care of its own—the unfortunate, the disenfranchised, the afflicted—is uninformed; the Wild West. At least England came up with a National Health Service, so good on that. That’s how a smart society handles things. All that and, still, America does have Donald Trump—a headless chicken if ever there was. He’s our best Christmas gift, and he’s arrived early.