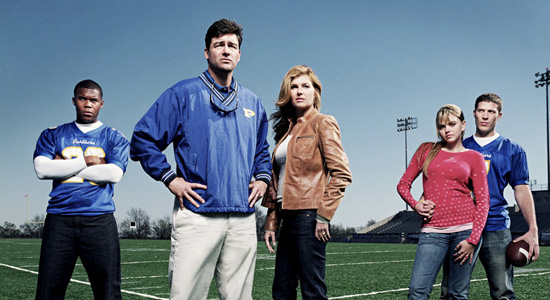 Grimm: We had the entire third season of Friday Night Lights on DVD in our van during our last tour. Julia had already seen all the seasons of FNL, but for the rest of us it was our first time. I wish losing your virginity was as magical as watching Friday Night Lights. It has a good mix of characters that I love (beautiful Tim Riggins, who is supposedly 16 but can’t help drinking beer all the time and hooking up with his 30-something year old neighbor (sigh); sassy, self sufficient Tyra; goofy, lovable Landry; sensitive Matt Serason, even though he can’t complete a sentence because of his awkward mumbling; tami, who may be the wisest person ever); and characters that I love to hate: Buddy “I’ll Take Care Of This” Gerraty; Lilah (groan); Jason (double groan); the grandma. My favorite moments in the show are the emotional football moments, like when Tim refuses to stay kicked off from the team and shows up to practice, against Coach’s will, in all his pads and starts apologizing to his fellow teammates one by one for always being late and hungover. In his usual compassionate way, Coach sternly says, “Go take your spot on the 30-yard line.”  I almost cried watching this scene, because by that point in the show I had realized that football really is the most important thing in the world.