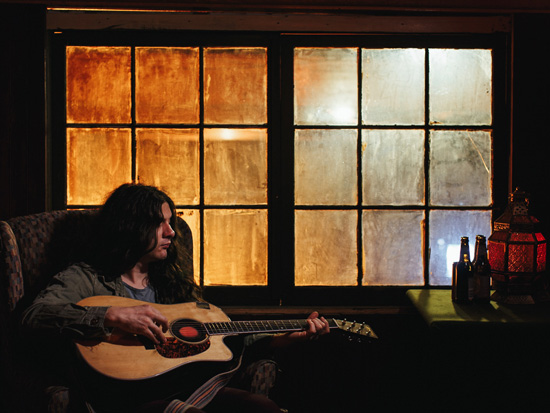 “Wanna live, wanna live, live a life like mine?” Kurt Vile asks on his sixth and best album, B’lieve I’m Goin Down. What’s that life like? MAGNET went askin’ and discovered a life of paradoxes. Vile talks about the conflicts between family and rock ‘n’ roll, between self-deprecating humor and serious metaphysics, between hard work and slacker ease, between his love of guitars and his newfound love of pianos. It’s not an ordinary life. By Steve Klinge

“Hi, I’m at the Spin Doctors concert. I’ll get back atcha.”

That’s the message you get when you call Kurt Vile. He does, indeed, get back to you quickly, and it turns out he’s chatty, thoughtful and forthcoming, even if he’s jetlagged from a quick trip to London, where he and his band, the Violators, played a main-stage set at London’s Citadel Festival. He’s also hesitant in his answers—he second-guesses himself and tends to make a statement, then qualify it. There’s no hesitance, however, to his excitement about B’lieve I’m Goin Down, his sixth album.

The LP is a bit of a departure. Instead of the electric-guitar freakouts and rolling pop songs that anchored past records, B’lieve favors acoustic guitars, banjos and piano. It’s still got the slacker vibe that Vile perfected on 2011’s Smoke Rings For My Halo and refined on 2013’s Wakin On A Pretty Daze, but it’s more meditative and weighty, while not devoid of humor. It’s a reflective and self-reflexive album about making and listening to music, about dislocation, about love, about life.

Wanna live, wanna live, live a life like mine?
Well I be doin’ it, baby, all the time.
To do so you gotta roll with the punches,
Jump from the sweetest to the toughest of tough love.
—“Life Like Mine”

“Every once in a while, I sit back and realize and know there’s all these beautiful gifts of life,” says Vile “I have a family, and I’m lucky; in a lot of ways, I’m living my dream. But everything’s always getting interrupted. There are moments of pure bliss with family, and then that moment when you’re away from your family, but you’ve laid down this perfect song, and in that moment you know why you play music. I feel like a lot of my life, too, is on the way to something else. It’s like everyone else.”

Except when it’s not. Vile, who is 35, lives in Philadelphia with his wife and two daughters, ages three and five, and he talks about the challenge of balancing love of family with love of music-making, balancing the “real life” of family and friends with the occasionally “superficial” aspects of record-making. They don’t always coexist easily. For the new album, Vile took to working on songs late at night, after his wife and kids had gone to bed, and recording took him away from Philly to New York, Georgia and Southern California. Songs were recorded in six different studios in the end, with a variety of band configurations and producers.

John Agnello, who’s worked on albums by Sonic Youth, the Hold Steady and Dinosaur Jr, had helped produce Vile’s last two albums. But Vile started recording his latest on his own with the Violators. “I didn’t use a producer right away, because you have to book time way in advance, and I wanted this to come more in real time, more organically,” he says. “Had I not had two good engineers in my band, that would have been a lot more difficult.” He’s referring to drummer Kyle Spence (whose Athens studio was one locale) and bassist Rob Laakso. Guitarist Jesse Trbovich is the other full-time Violator.

“My experience with Kurt, it’s always been record, record, record, and then eventually you have an album,” says Laakso, who started playing in the Violators in 2011. Laakso co-produced, with Vile, five of the album’s 12 tracks. “I don’t think there was any grandiose plan to have the Violators and only them on this one.”

They did a session in Joshua Tree, after Vile had gone there to jam with Malian band Tinariwen. On the West Coast, the band included Warpaint drummer Stella Mozgawa and multiinstrumentalist Farmer Dave Scher, both of whom played on Wakin On A Pretty Daze.

Eventually, they amassed a “swamp of material” and “needed outside perspective,” Vile says. Enter veteran Rob Schnapf, who produced several of Elliott Smith’s records and the recent Ducktails album (the project from Real Estate’s Matt Mondanile, a friend of Vile). More importantly, he did Beck’s Mellow Gold.

“Elliott Smith is cool and all, but it’s not like I got deep into him growing up,” says Vile. “But Rob Schnapf started Bongload, and Beck’s Mellow Gold, that’s my favorite high school (era) weird blues. He nailed it with that record.”

Schnapf came along at just the right moment. He was working in Los Angeles with Mondanile on the Ducktails album, and he says Vile just popped into his head. Schnapf had liked Wakin On A Pretty Daze.

“I like somebody who’s got a unique thing,” says Schnapf. “He’s got style. I like his words. He’s got a vocal character. It’s just he’s got that thing.” Those generalizations are more meaningful when you see them as applying to Beck and Elliott Smith as well.

Schnapf is friends with Matador Records cohead Chris Lombardi, so he texted Lombardi, who also lives in L.A., and asked what Vile was up to.

Here’s where the coincidences multiply, according to Schnapf: “Chris said, ‘That’s really weird. He’s in town and we’re looking for something to do.’ I went back in the room and told Matt, and he said, ‘I know him; I’ll text him.’ So, Kurt got two texts at the same time. He just came by and we hung out and it was just normal and comfortable.”

“All of a sudden, Rob Schnapf seeks me out, which was key,” says Vile. “I said, ‘OK, are you available next week?’ We were just going to mix. But, in the process of being inspired and knowing I was about to take it to another level working with this guy, which I very much needed, I wrote that ‘Pretty Pimpin’ song. So, just a couple days before I headed to L.A., I had this pop song, and I know I needed a pop song.”