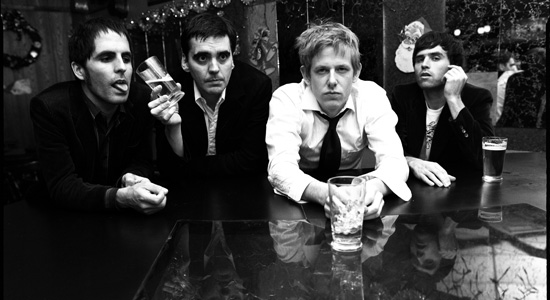 The 10th anniversary of Spoon’s Gimme Fiction will be celebrated December 11, when Merge issues a limited-edition remastered version of the album, plus a second disc of 12 previously unreleased demos from the era and more … Fleetwood Mac has announced the December 4 release of a deluxe version of 1979 album Tusk—complete with unreleased session recordings, singles, demos, remixes and live tracks—from Warner Bros. … 99¢ is the new album from Santigold, due out via Atlantic on January 22 … Ghostly International will issue the new Choir Of Young Believers record, Grasque, on February 19 … On December 4, Bruce Springsteen will release The Ties That Bind: The River Collection via Columbia. The four-CD/three-DVD boxed set contains unreleased material from The River era, including never-before-seen live footage and studio outtakes … The seventh album from Coldplay, A Head Full of Dreams, is due out December 4 via Parlophone/Atlantic … The Cave Singers will independently release their fifth studio album, Banshee, on February 19 … Eagle Rock has announced the November 20 release of the Who’s Live In Hyde Park in celebration of the band’s 50th anniversary … Good Advice, the new album by Basia Bulat, is due out February 12 via Secret City … On December 4, the Black Crowes will re-release their first four albums—Shake Your Money Maker, The Southern Harmony And Musical Companion, Amorica and Three Snakes And One Charm—on high-grade 180-gram vinyl on American/UMe … The 10th studio album from the Cult, Hidden City, is set for a February 5 release on Cooking Vinyl … Freakwater has announced the February 5 release of its first new album in 10 years, Scheherazade, via Bloodshot … Also returning after a 10-year hiatus is Dweezil Zappa, who will release an all-new album of original songs, Via Zammata’, via Fantom on November 27 … Back in 2013, the Los Angeles Philharmonic and Los Angeles Master Chorale performed Frank Zappa’s 200 Motels (The Suites) at the Walt Disney Concert Hall. This live performance will be released worldwide November 20 via Zappa/UMe … Long Lost Suitcase is the companion album to Tom Jones’ autobiography, Over The Top And Back. The album, due out December 4 via S-Curve, will feature interpretations of songs by the Rolling Stones, the Milk Carton Kids, Willie Nelson and more … Resonance will release One Night In Indy, an exclusive 1959 performance by Wes Montgomery featuring the Eddie Higgins trio, on CD for the first time January 15 … Bette Midler will release an 18-track collection highlighting love songs recorded during her career, A Gift Of Love, on December 4 via Rhino.