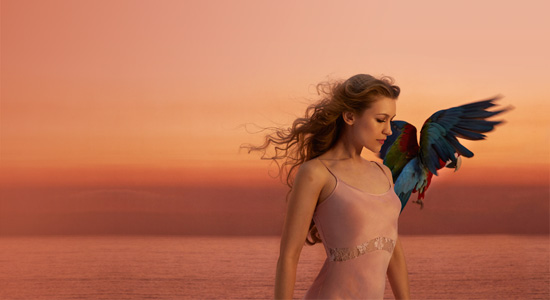 Every song is its own character for ambitious wordsmith Joanna Newsom

“I hope I don’t realize I made a terrible misktake in a year and the thing that I’ve been trying to say with this record is not as palpable as I thought it would be. But for me, it’s kind of all there.”

Joanna Newsom is talking about Divers, her fourth album. She is in New York City, visiting from her home in Los Angeles, where she lives with her husband Andy Samberg, the comedian and star of TV’s Brooklyn Nine-Nine.

Divers is an intricate and paradoxical work, full of internal connections both lyrical and musical, but also built from a diverse array of instrumental settings and arrangements that make each song discrete. It’s both linear and circuitous. The themes may be “kind of all there,” but Divers is still enticingly enigmatic.

When Newsom debuted in 2004 with The Milk-Eyed Mender, she seemed to fi t in with the “freak folk” movement and artists like Devendra Banhart and Vetiver. She was an oddity—a classically trained harpist with an unusual voice that fell in the neighborhood of Dolly Parton and Kate Bush, who wrote charming songs like “Bridges And Balloons” (which the Decemberists later covered) and “Sprout And The Bean.”

But 2006’s Ys, with its five long songs and orchestral arrangements by Van Dyke Parks, quickly established Newsom an ambitious, complex artist, and 2010’s sprawling, three-CD Have One On Me further broadened the scope of her talent.

Divers is more focused and coherent, full of references to wars and New York City, of allusions to Romantic poems and Dutch Masters, of birdsong and love songs.

“There are repeated references in a lot of ways,” Newsom says, with a laugh. “More so than with any other album I’ve made, this one is unified by a few themes and feelings and questions and places. I sort of think of those things as characters. The city of New York is a character that has a couple cameos because it was trying to illustrate a point or stand in for something.”

“Sapokanikan,” the album’s first single, takes its name from a Native American word for the area of what became Greenwich Village. Asked about the connections among the allusions that riddle the song, Newsom laughs again: “It’s all in the song. Not to be evasive, but I think it’s more fun to trace the line as it runs through the lyric than for me to do the sort of CliffsNotes version.”

As Newsom began writing after touring for Have One On Me, her new songs began to feel connected.

“I started to notice that, even though the songs I had written so far seemed on the surface very different and seemed to be about different things, they seemed to be circling around the same thing,” says Newsom. “Or begging the same questions for me or preoccupied with the same fears or driven by the same joys. The songs all lived in the same world, I noticed.”

Newsom cares deeply about words, and the twists and turns of the melodies—these songs avoid conventional verse/chorus structures—help form the lyrics.

She cites Hemingway, Faulkner and Nabokov as a few of her favorite writers (“You know, the dead white guys of note,” she says). And Thomas Pynchon, although Newsom had finished writing and much of the recording of Divers before she appeared in and narrated Paul Thomas Anderson’s fi lm of Pynchon’s Inherent Vice.

Although not exactly forming a suite, the songs have musical connections as well: The end of one often flows into the beginning of the next, and motifs recur. But Newsom was also interested in disconnections. She worked with different arrangers, none of whom worked on more than one song. Collaborators included the Dirty Projectors’ Dave Longstreth and avant classical composer Nico Muhly. She also used many different keyboards, including a clavichord, a celeste, a Marxophone, various vintage Mellotrons and an Estey field organ. Even as she composed lines on the harp, she intended to transpose them to different instruments.

“From very, very early on, it was part of the way I was thinking about this record,” she says. “I knew that I wanted the songs to be really variegated in color, I think because they were really united in narrative themes and they were united harmonically, so I wanted them to have these really saturated and varying colors. I wanted each song to inhabit its own specifi c world. I wanted the air to smell different and the quality of light to be different, and the ground to feel different underfoot, and people to speak a different language in that world. I wanted each one to be completely self-contained and full of its own specific character.”

Divers is full of puzzle pieces, and it rewards deep and careful attention. It is an album to immerse oneself in—the puns on the title are too easy to pass up, and even Newsom can’t avoid them: “When I get home I’m going to really dive into—no pun intended—rehearsing for the tour.”