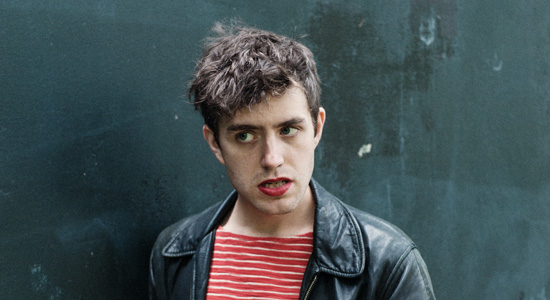 Ezra Furman is the kind of artist who comes along every now and then to reduce jaded music hacks to gibbering, simpering wrecks. All cynicism evaporates, all objectivity is thrown out of the window, and terms like “life-changing” are tossed around with giddy, reckless abandon. And it’s not just the press. Witness Furman’s new label boss, Bella Union supremo (and erstwhile Cocteau Twin) Simon Raymonde. After catching a particularly riotous gig at London’s Lexington earlier this year, Raymonde took to Instagram and became very, very excited indeed. As in, capslock excited:

“EVERYTHING. ALL THINGS. LIFE. THE BEGINNINGS. THE STRUGGLE. EVERYDAY. OUTSIDE. TEARS. HEARTBREAK. UNBRIDLED JOY. NOTHING ELSE MATTERS BEFORE OR AFTER. JUST THIS MOMENT. LIVING. SHARING. LOVE. WHY WE BOTHER. THE MOST IMPORTANT. DON’T USE THE WORD VISCERAL UNLESS IT REALLY WAS. NEVER TO BE FORGOTTEN.”

Quite. And it’s not just Raymonde. The rest of the U.K., it would seem, has fallen head over heels in love with Furman. He’s received across-the-board fi ve-star reviews, BBC 6 Music has practically adopted him, he sells out shows in minutes, and in one of the summer’s more surreal musical/media meet-ups, he appeared in a suitably somber interview on Channel 4’s evening news. Not bad for a selfconfessed misfi t, a cross-dressing, bisexual, observant Jew with a history of depression. Even more impressive when you consider that, as recently as three years ago, he was pleading for money on Kickstarter to fund his first solo album, The Year Of No Returning. Not that he seems particularly fazed when MAGNET calls him to talk about this sudden burst of fame.

“It is odd, isn’t it?” he says, sounding more than a little bemused. “But I don’t really care—let people like it or not like it. There’s no real strategy here. I dunno—it used to matter a lot more to me. I used to want more attention. I wanted praise, like from media outlets. But I don’t care about that anymore; I really don’t.”

Back here in his native U.S. (Furman hails from Chicago), he’s still flying resolutely under the radar. And frankly, that’s criminal, as his latest album, Perpetual Motion People, is far and away one of this year’s most sublime efforts. It’s a giddily splenetic, high-octane record, packed full of a dizzying array of influences—the Violent Femmes, Lou Reed, ’50s doo-wop, Bowie, Jonathan Richman—but one that neatly sidesteps pastiche. It’s an unbridled clarion call to all the freaks and geeks out there, the lonely kids, the misunderstood. Its lyrics abound with images of depression, confusion, sexuality and religion, but there’s no po-faced, self-indulgent navel-gazing here; indeed, it’s about as far removed from stereotypical singer/songwriter miserablism as you could imagine. Instead, it revels in an utterly joyous, uplifting level of cathartic intensity, reminiscent of (in spirit at least) early Titus Andronicus.

“Yeah, I mean there’s a temptation to write very studied, mannered songs, the whole singer/songwriter thing, I suppose,” he says. “But it’s unexciting, a little sedated. So, I started thinking I should just o er up total enthusiasm … I just wanted to let all this energy out.”

And it’s a ploy that works brilliantly, resulting in a hugely life-affirming record. What’s more, there’s an endearingly infectious lack of studied cool that makes it all the more attractive.

“Yeah,” says Furman. “Something unbridled. I dunno, I mean, I have no idea about how to be cool. I’ve tried, but it just didn’t work for me. I just confess things and go over the top emotionally.”