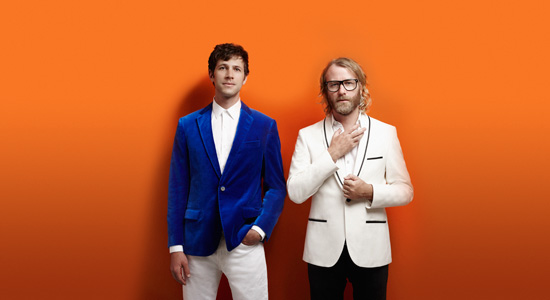 Don’t call El Vy a band. Matt Berninger and Brent Knopf are busy enough with their main gigs: Berninger as the singer for the National, Brent Knopf as the leader of Ramona Falls, his main project since leaving Menomena.

“Neither of us felt we need another band,” says Berninger. “I have a band that I love; Brent has a band he loves. So, Brent and I keep calling this a collaboration.”

In fact, the two were rarely in the same room when making Return To The Moon, the debut El Vy (pronounced as in the plural of “Elvis”) album. Berninger and Knopf have been friends for a decade—the National and Menomena toured together—and five or six years ago, Berninger asked Knopf to share some song “ideas.”

“The first time he sent me ideas, he sent 450 ideas that he had been collecting over the decades, maybe,” says Berninger. These fragments filled an 11-hour Dropbox folder.

“It could be anything from a 45-second acoustic piano thing to a looping, multi-layered synth jam with electronic beats and bass lines and oohs and ahhs,” says Knopf. “It ran the gamut from something really simple to something really complex.”

Berninger would listen to them while on tour with the National, and he created a separate folder for his favorites. And then the two started passing files back and forth that they began to shape into songs.

“We kept saying, ‘Here are some ideas. Do whatever the fuck you want with it.’ And we would,” says Berninger. “He would send me stuff and I would speed up stuff, I would cut out stuff, and I would rearrange it and I would send it back to him. He would do the same thing. He would tear apart what I had done; he would write all new music under what I did; he would rearrange it. That’s how it went for a long time just via email.”

“It’s kind of like a scrambled Rubik’s Cube that we’re passing back and forth like a hot potato,” says Knopf. “By the time you get it back, half of it has been all turned around backward, but suddenly you have more clarity about where the song is going. And then I’d do a move and pass it back to Matt.”

About a year ago, they began to work on the album in earnest, and the songs took many forms: elegiac ballads (“No Time To Crank The Sun,” “It’s A Game”), loping synth-pop (“Paul Is Alive”), rumbling warped blues (“Happiness, Missouri”) and cheery new-wave pop (the title track).

Berninger worked on lyrics and melodies by improvising, sometimes over shorter loops, often later in the process. He worked on them in hotel rooms while on tour—you can hear him talking to someone from housekeeping in the middle of “The Man To Be”—and when he was at home, at one point pitching a tent in his backyard to sequester himself from his wife and six-year-old daughter.

The lyrics became their own Rubik’s Cube of references: to Berninger’s coming of age in Cincinnati rock clubs, to his parents and wife, to characters named Didi Bloome and Michael, to punk band the Minutemen and to the musical Grease. The title track, for instance, is subtitled with a Minutemen allusion: “Political Song For Didi Bloome To Sing, With Crescendo”; “Paul Is Alive” is a Beatles allusion, but it is also a reference to Berninger’s father, Paul (a fact that Knopf didn’t know until our interview).

“When I’m writing lyrics, it’s all coming from the same mush that’s in my brain and in my environment at the time,” says Berninger. “I was listening to tons of Minutemen at the time and watching We Jam Econo, the doc about them, because my brother made a doc about our band (2013’s Mistaken For Strangers). We watched a bunch of docs around that time, specifically that one, to figure out how to make a good rock doc. Then I turned D. Boon into a woman, called her Didi. My daughter was watching Grease and obsessed with the Grease soundtrack, so it kind of also became this musical based in Cincinnati, so it’s kind of like Sandy and Danny from Grease. But it’s also about my wife, it’s about me; all that stuff gets all mixed up in it.”

Berninger admits he wasn’t much of a Minutemen fan when he was young. “I’m a big Minutemen fan today, but I’d be lying to say that the Minutemen were my favorite band,” he says. “It was the documentary and it was the friendship between these two guys and how they found each other through music. And that’s how I kind of found myself: The record kind of digs into how I discovered music. The discovery of alternative rock, R.E.M. and the Cure and the Smiths very much changed who I was, and who I am now is really because of music. The doc is about these two guys who would fight all the time, but they were best friends and it was music that would keep them together.”

And it’s that bond that music creates that is the story of El Vy, too. Berninger and Knopf may not have a new band—although they assembled one for a short El Vy tour—but they do have a collaboration that is likely to continue. There’s still a lot of stuff in that Dropbox.

“I’d be surprised if I’m going to be able resist opening up another folder and diving into stuff again,” says Berninger.