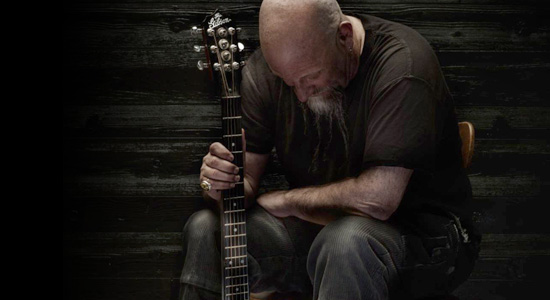 People have been spanking planks by the Mississippi for a long time now, but no other string player is quite like Paul Metzger, and no one plays instruments quite like his. Metzger lives in St. Paul, Minn., which is bound on two sides by the River Of Song. But even though his biography includes a brush with the Replacements—he temporarily swapped his acoustic guitar for an electric after seeing them on local TV and thinking that it looked like a lot of fun—his creative path, like the music he plays, cuts a very singular path.

After playing with high-energy power trio TVBC, Metzger retreated to the privacy of his workshop, where he devised an approach to solo acoustic guitar and banjo playing that merges the focused, kinetic improvisation of Hindustani music with the rich dissonance of free jazz and a heavy, boot-driven rhythmic drive. In that same workshop, he has also modifi ed his instruments until they look like Heidelberg Project yard decorations. His banjo has two-dozen strings splayed across its body, and when he plays it, he shifts masterfully between machine gun-intensity, singlenote runs and eerie bowed passages.

Metzger has been on a mission to free the instrument. “It’s so limited in its application,” he says. “I have this evangelistic thought about the banjo.”

On a series of tours across the U.S., at frequent hometown gigs at the Khyber Pass Cafe, where he co-curates an improvised music series, and on albums like Deliverance and Tombeaux, he has sought to deliver it from convention. But he devotes half of 1300, his latest LP for Nero’s Neptune, to a similarly modifi ed guitar that he regards like an equal partner.

“We’ve covered over 40 years together,” he says, “and I wanted to document what is inside each of us.”