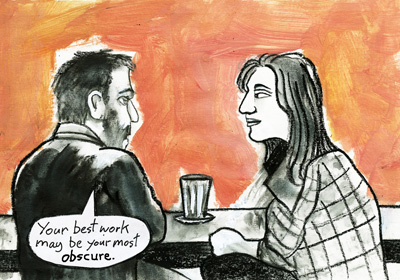 Every Saturday, we’ll be posting a new illustration by David Lester. The Mecca Normal guitarist is visually documenting people, places and events from his band’s 31-year run, with text by vocalist Jean Smith.

I propose that many, many people contribute nominal amounts and a suitable property is purchased outright to sidestep banks and mortgages. I’m talking $5, $10, $15 and $20 contributions from between 100,000 and 25,000 people. Is it possible? Are there enough who would view the acquisition alone as a viable accomplishment? Are there enough artists who would view having the opportunity to go to a writing retreat for a month? Low income culture workers are pretty much guaranteed a form of acceptable poverty. Because we are doing what we love, we’re expected to be OK with being poor and not having the funds to take time away. Time away from daily concerns can be extremely important for creative types. If only to have another sort of experience. To replenish, recharge etc. But where can one go when one is chronically broke with no end in sight? This place. The place I’m talking about. And, at some future point, perhaps it turns into permanent housing for elderly artists.

How about this for a revenue stream: wages for one permanent resident (admin and general maintenance) is paid by making one or two commercial rooms open to the public. Ideally this also pays taxes, insurance, utilities.  If one room is booked for half the year at $100 a night, that’s $18,250 annual revenue. If the permanent resident isn’t paying rent, then their wage could come out of that. Just for instance. Or maybe there’s a space that could be leased (a café could be operated by a secondary entity).

The way I see it, there are two things here. It’s visionary. Let’s see if we can make this happen! And it’s a viable business. Would a whole bunch of people—artists en masse—want to secure property in this way? Let’s be like Pamela (re: this week’s download) and make some waves! Wider and wider and wider these days.