Brent Rademaker would like to think that GospelbeacH’s Pacific Surf Line is a celebration of our country’s two left coasts—though maybe he would’ve preferred a bit more Old Florida charm to counter the L.A. swagger. “I really wanted to make this album sound like the kinds of music I listened to growing up in the ’70s,” says Rademaker, a native of the Gulf Coast. By and large, though, Pacific Surf Line celebrates Rademaker’s return to Southern California. For a collective effort, the LP is surprisingly lean, with more refined nods to the Flying Burrito Brothers twang that informed Rademaker’s former group, Beachwood Sparks. GospelbeacH—Rademaker, Neal Casal, Jason Soda, Kip Boardman and Tom Sanford—isn’t afraid to broach the breezy accessibility of yacht-rock mainstays like the Eagles and Loggins & Messina, either. The band will be guest editing magnetmagazine.com all week. Read our new feature on them. 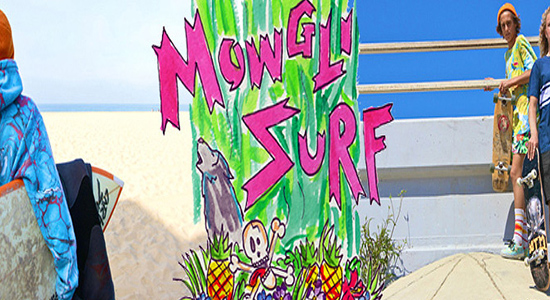 Rademaker: This is a really cool up-and-coming surf-based clothing line designed by twin brothers Alex and Phillip Seastrom. They are third-generation Californians who operate Mowgli really close to my neighborhood in Highland Park. They are as into having fun and celebrating the individual through bright colors and vibrant designs as they are knowledgable about the industry they are coming up in. They are inspired by books and music from many ends of the spectrum, well beyond the average surf jocks swilling beer, pounding kooks and dressed in bad Baywatch garb. They’ve got heart and live with a reckless optimism and declare themselves “enemies of the average!” It shows in their clothes. All made in the USA!

Airbrush, tie-dye and irony-free graphics propel their designs, and they honestly believe in what they do. Coming from a tight, loving family in La Crescenta, in the shadow of the San Gabriel mountains, these brothers are well on their way to becoming the Burger Records of surf wear. Check out Mowgli Surf, and get outta that boring black T-shirt before you get mistaken for the wrong person or some average schmo!