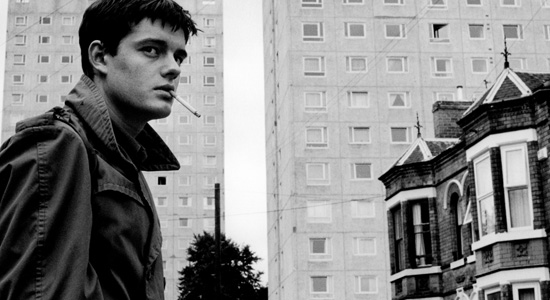 Any art house looking for a third picture to run with Nowhere Boy and Love & Mercy as an “Early Days Of Troubled Rock Stars” spectacular featuring John Lennon and Brian Wilson, need look no further than Control to fill out its marquee. The short, miserable life of Joy Division frontman Ian Curtis all but makes the difficulties of those Beatles and Beach Boys stars seem more like a catered picnic on the beach in comparison.

Control opens with the 1975 teenage marriage of Curtis (Sam Riley) and his bride Debbie (Samantha Morton) as they settle into a tiny flat in Macclesfield, a working-class town just south of Manchester, England. Curtis is so tightly wrapped, none of the clichés of young married life (airborne crockery, late-night screaming matches) take place. His nights out are all spent as the lead singer of Warsaw, the post-punk combo of guitarist Bernard Sumner and bassist Peter Hook.

The band astutely changes its name to Joy Division, signs a record deal with up-and-coming Manchester label Factory, and thanks to its unavoidably seductive sound—the metronomic guitar wizardry of Sumner and the doomsday baritone voice of Curtis—the British star-making machinery is set in full motion. It’s happening here just as it would with similar, slightly pressed off center U.K. acts the Cure and Echo & the Bunnymen, around the same time.

Joy Division might still be working shows for crowds of reminiscing seniors these days if the band hadn’t collapsed well before its time thanks to two major issues hidden from the public like dirty laundriy in the duffel bag of Ian Curtis. Problems begin with the road girlfriend, a scheming Belgian lass who never quite seems to understand that Curtis is more or less happily married and continues to suck him into her web. That one might have been managed in time. The second problem was the fatal blow to Joy Division.

Curtis had an ever-worsening case of epilepsy that struck him down to the ground, writhing in agony, when he least expected it, sometimes in the middle of the band’s set. Changing courses of medication, as suggested by his wife, seemed to do little good. The mounting pressure of Joy Division’s fast-approaching, two-week debut tour of the U.S. and Debbie’s decision to divorce him have driven Curtis to desperate measures. “I don’t even want to be in the band anymore,” he whimpers to their manager, at one point.

It’s the near perfect treatment of a band headed directly toward the crowded intersection of major success and total destruction, exactly rendered by first-time film director Anton Corbijn, that will make most other band biopics seem like last week’s spaghetti bolognese by comparison.