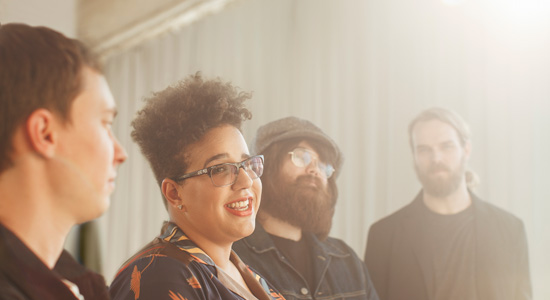 Alabama Shakes built a huge following with their classic rock debut, so revisiting that Hendrix-meets-Janis vibe on the follow-up would have been an easy path to world domination. Bravely, the band dispensed with the grainy, slavishly retro vibe of Boys & Girls in favor of bolder, decidedly weirder explorations on Sound & Color. Yes, there are still nods to the past in the irresistible Curtis Mayfield guitar bounce of “Don’t Wanna Fight” and the Zeppelin-ish “Gimme All Your Love.” More typical is the opening title track, its xylophone, warped strings and shuffling beat conjuring a dream (or drug) state, prophetically declaring that “A new world hangs/Outside the window/Beautiful and strange.” As the record unfolds, the “beautiful and strange” includes molasses funk, bedtime folk and a six-minute vision quest entitled “Gemini,” gently propelled by a ’lude-popping rhythm section, stargazing atmospherics and acid-drenched guitar. Here and elsewhere on the record, leader Brittany Howard, she of the Herculean pipes, is a model of slow-burn restraint, murmuring and cooing as often as she belts it to the rafters. Granted, this subtler approach will see fewer fists pumping in the arena, but anyone with a pair of headphones should have had Sound & Color in heavy rotation in 2015. —Matt Ryan