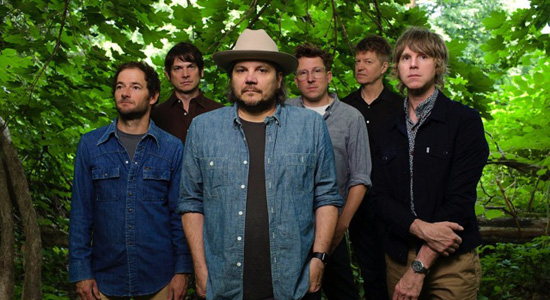 Before we do: Star Wars is a great record. Whether it’s also a Great Record is up for debate, as these claims always are. But looking over 2015, flipping through the pages here, we find some entries from brand-new(ish) acts, as well as semi-established bands and artists pushing their music in new directions, warming up for the kinds of pitches they’ve rarely or never thrown. In that context, Star Wars is notable not for how Wilco shifts gears on it, but for how comfortable its music feels, as form-fitting and as broken in as George Harrison’s proverbial Old Brown Shoe. It’s the sound of a band that, for this record anyway, found a pocket, and dropped into it happily.

When Jeff Tweedy and I spoke last year prior to the release of Sukierae (his collaboration with son Spencer under the Tweedy moniker), he reminded me in passing of something I knew, but had internalized so fully that I’d begun, I think, to forget it. Every “Wilco” that released an album up until 2007’s Sky Blue Sky consisted of a different lineup. That phenomenon has been noted often in the band’s press—particularly in the context of Wilco’s eclectic, constantly shifting musical aesthetic, which derives—and always has—from Tweedy’s voracious and indiscriminate musical fandom. The Wilco that had, as of summer 2014, released three albums, was the only iteration of the band to survive past a single full-length release.

That same Wilco stealth-released Star Wars this past July, without much press fanfare, as a free download via Wilco’s web site. It’s a tactic the band had used once before, during the famously embattled production and release of 2001’s Yankee Hotel Foxtrot. And Wilco has offered new releases in advance as online streams and single downloads several times between then and now. But the context here was radically different: The temporarily free release of Star Wars was the act of a band—and the web content and online promo copy freely acknowledged this—that’s been fortunate enough (and sufficiently supported by its fans) to be able to hand out a 33-minute record for nothing to anybody who was interested in checking it out, prior to the CD and vinyl release. It’s Wilco’s 21st birthday this year, but the fans were the ones who got the present.

Again, Star Wars is a great record. Is it Wilco’s best? I doubt you’d find many listeners making a case for it. It’s a slight affair, running just half an hour. Only one track, the icy, slowly swelling “You Satellite,” even breaks the four-minute mark. We have here a bunch of short, sharp, mostly pop songs, all of whose canvases are very small in comparison to the sprawling experimental compositions of which the band is equally capable. (The opening blast, angular 76-second instrumental “EKG,” might be a nod to fans who prefer the sharp edge of that particular arrow in the band’s quiver.) And though the songs are solid, taken one by one, they don’t break much new ground, or even cohere into a single album-length aesthetic, the way one often expects to read about in album-ofthe-year entries like these.

What it does accomplish, though, is something Wilco—this Wilco, the first Wilco to release multiple albums—hasn’t had the history to do until now. Brief as it is, Star Wars is the work of a band with enough shared experience to know what it can accomplish with its collective left hand, what it’s capable of when it pushes itself to its stylistic limit and even courts self-indulgence, and how the individual strengths of its members can be most promisingly juxtaposed. Seen through that lens, Star Wars is this Wilco’s fourth album. And having bounced around making experimental records full of noodly guitars, straight-up rock albums and eclectic blends of the two, Tweedy and Co. this year put out a collection of songs that, more than anything, shows off their stylistic sources and their capacity for paying homage to them—or internalizing and digesting those sources into their own collaborative work.

There are stomping fuzz-rockers (“Random Name Generator”), swoopy tone poems (“More…”) and soft-hearted romancers (“Where Do I Begin”). And then there are Tweedy’s vocal performances, which are among the high points on the record: Check the Neil Young phrasing on “Taste The Ceiling,” or the sloppy, laconic, marble-mouthed delivery of “The Joke Explained,” which sounds like the most fun Tweedy’s had singing lead in an album or two. Star Wars is something of a victory lap for a band that’s gone through lots of changes. But it’s also a record that reveals how carefully Wilco’s been paying attention to its own development. There are other albums, even other Wilco albums, as good as Star Wars. But this year there weren’t any as self-aware, or as rewarding in their survey of a single band’s long-game history.

And those other bands? The less established or widely known ones whose records you liked that deserved more press and a wider audience? Wilco had its favorites, too. And anyone who downloaded Star Wars shortly received a follow-up email sharing recommendations for other bands’ releases, albums for which we might fork over the dollars we’d saved on Wilco’s. In any profession, that’s called class. In the music business—trust us on this—it’s a level of generosity you see only rarely. Happy holidays. And happy hunting. —Eric Waggoner