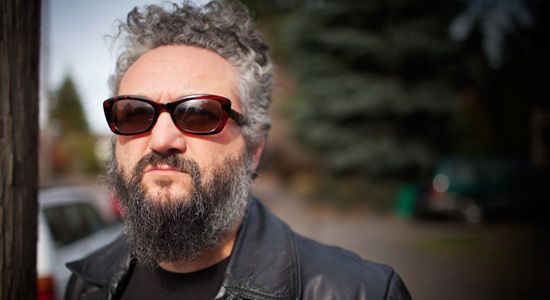 Health issues sidelined Fernando Viciconte for years, until a couple of pals badgered him into creating the best record of his career

For a working musician, two years away from the game is a long dry spell. Nonetheless, that was the situation facing Portland, Ore., singer/songwriter Fernando Viciconte (whose band shares his given name), not so long ago.

“From the time I put out Old Man Motel in 1999, I started experiencing this terrible stomach pain, and consequently, a lot of throat problems,” says Viciconte somewhat clinically. “I could never get it diagnosed properly. I’d play sporadically—I might do a four-day tour, but eventually it got to the point where I could barely sing after a week. One of my (acid reflux) episodes resulted in pneumonia, and I ended up in the hospital. They took some x-rays, and the doctors told me, ‘Bad news: We see a spot on your lungs.’ It wasn’t cancerous, but I did have a hiatal hernia. So, I finally had this massive stomach surgery: They took the top third of my stomach and wrapped it around my esophagus. From that day onward, I never had heartburn again. But I needed a year off to recover.”

Given the fickle nature of the music industry, any kind of time gap can very rapidly separate artists from their audiences, and stop a career dead in its tracks.

“I had a day gig as a property tax accountant for nine years,” he says. “And I was so depressed; nobody could figure out why I couldn’t play live, so I’d get angry about that. I’m working a nine-to-five job that I hate; I’m seeing my friends I’ve known for years doing their thing; I’m disenchanted and kinda bummed at the music industry. But more than that, I couldn’t perform my songs and do what I love to do.”

Enter: producer and fellow musician Luther Russell, who had relocated from Portland to Los Angeles, but was still in touch with Viciconte and wondered what he’d been up to.

“Luther asked me, ‘Where’s this box of tapes I keep hearing about?’” says Viciconte of a conversation concerning the dribs and drabs of demos he’d stowed away during his downtime. “I said, ‘It’s just disconnected ideas; a bunch of shit.’ He started playing them and was like, ‘Well,that song isn’t shit!’” he laughs, remembering the first time Russell played a new track, “Kingdom Come.” It was a galvanizing moment.

Next up: former R.E.M. guitarist Peter Buck. “The next week, I was watching a Minus 5 gig in town,” says Viciconte. “I’d given my album, Enter To Exit, to Buck before the final R.E.M. tour. He comes up to me after the show and goes, ‘What’s this bullshit about you not playing anymore?’ He didn’t know anything about my health situation, just tells me, ‘Look, I don’t care if you never tour again, but I’ll go into the studio and record your next album with you. Just make another record.’ So, the combination of Luther telling me I actually had some songs, and Pete saying he’d record on it, got the ball rolling.”

The resulting full-length, Leave The Radio On (Fluff And Gravy), is what came of his friends’ prodding, and is easily the best thing Viciconte has done in a career already characterized by high-quality work. Produced in a reverb-enriched, echo-heavy style that leans heavily toward ’60s psychedelia, the record zigs between the rough and ready, Petty-esque Americana that has long been Viciconte’s stock in trade (“Burned Out Love,” “Save Me”) and slower, sadder compositions that split the difference between John Lennon’s stranger solo work (“The Dogs,” “White Trees”) and Los Lobos’ jingle-jangle Chicano pop (the title track, a metaphor for old-world human connection struggling to survive a social-media world). It’s a triumph; Viciconte’s most coherent work despite the fragmentary, stop/start fashion in which it was created.

“I had kinda stopped playing music; nothing at all for two years, no gigs, no recordings,” he says. “I couldn’t even bring myself to pick up a guitar. This (record’s) been sitting there for three or four years. Normally, I’d be sick of it by now, but what’s stuck with me is the human side of it all, the mistakes. It’s not perfect, but the flubs, the things we didn’t mean to do, are my favorite parts. We tried to keep the heart and soul intact, make sure nothing was lost between the creation and recording process.”

It’s an apt metaphor for Viciconte’s life and work: torn and frayed, but possessed of an authentic quality you don’t necessarily need to perfect.