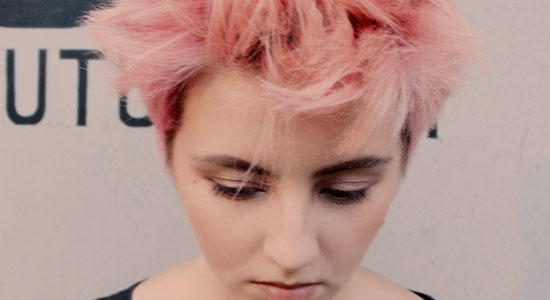 SPC ECO is the U.K.-based duo of Dean Garcia (Curve) and Rose Berlin. On their new album Dark Matter, they have left behind a bit of the industrial shoegaze of Garcia’s past and have made a full-length that pulls from grime and trip hop so much you might think it was recorded ages ago in Bristol. Berlin and Garcia both sat down recently to put together a mixtape for MAGNET that wasn’t so much the inspiration behind the new album, but what they consider essential viewing and listening. Dark Matter is currently available from Saint Marie Records.

Björk “All Is Full Of Love”
Because it’s awesome, stylistically speaking way ahead of its time and very accomplished. Chris Cunningham works his magic to great effect here. When you first view this video, it’s clearly one of those benchmark pieces of work that defines a team of people at the top of their game. We haven’t listened or viewed this piece for at least 10 years, and it still stands the test of time as to how you should make visuals for your song; you’d just need the squillion pounds it costs to make it. Regardless of that, it’s just a brilliant piece all round. Video

Aphex Twin “Come To Daddy”
Because it’s scary, scary as fuck, really. Again Chris Cunningham steps up and rolls with one of the most inventive and original electronic artists on the planet. Richard James knows his shit, the depth of sound and attitude within this work is immense. When you consider the early and quite brilliantly timed and placed Ambient Works releases and follow the progress to this work, it spans the alternative electronic genre like no other. Electronica in art; he just follows his heart and mind, which is something you just have to do in order to achieve this kind of effect and tone. Plus, he’s incredibly inventive both musically and scientifically. This video is an amalgamation of it all tuning in and working in exactly the right time and space. Stunning. Video

Daft Punk “Around The World”
Because it’s glorious. When this came out, it had an age and class to it that was undeniably infectious and instantly loveable. Anyone into the early onset of proper club music just jumped to attention with this track. Playing very loud is appropriate here. You could have put any visual to it and it would have been great but they didn’t—they got Michel Gondry involved and came up with this genius repetitive visual expertly choreographed by Blanca Li that can’t fail to make you smile and revel in its marvelousness from beginning to end time after time. Its greatness lies in the fact that it has the same effect no matter how many times you’ve seen it: smiles, good times and eye candy to die for. Groovy AF. Video

White Stripes “Seven Nation Army”
Because it’s trippy weird and brilliantly conceived and directed by Alex Courtes and Martin Fougerol. The skill and knowhow that goes into something like this is staggeringly disciplined, precise and notoriously difficult to maintain and achieve. Again a brilliant song, simple and original even though you can hear many musical influences from the opening bar, yet somehow it miraculously forms its own original essence and meaning. It also helps a great deal that Meg is the drummer. We’ve always loved the combination and duality of the band, but Meg always shines and delivers a crude and perfect shade and performance redefining cool and playfulness in a very iconic way, which is exactly what the film does. Flick book genius. The Lego one was brilliant too. Video

Radiohead “No Surprises”
Because it’s hard to watch. I’ve read stories of Thom having to struggle above and beyond with this film, and you can sense that throughout this piece. Radiohead are a proper band, they make proper records with all the right elements very much in place. I don’t like all of their records for a reason—that’s because I’m not meant to. They shift and move with their own internal agendas to create something that will push and test your abilities of perception to the max. They are and always will be the best band in the world for this very reason; this video just confirms that being involved with Radiohead is going to be an uncomfortable all-questioning step into the unknown. I’m glad they made this video, because now no one else has to go through it again. Thom can rest easy now. Please don’t try this at home. Video

Eurythmics “Sweet Dreams”
Because it broke the rules. Dave told me as soon as they’d finished and recorded the song that it was one of those defining moments you strive for as a recording artist. He fought tooth and nail with the reluctant record company of the time insisting that it was a big record and to let him have the funds to make the video for it. I’ve always admired Dave for that. His philosophy has always stuck with me. Always be steadfast in your convictions regarding your art, stand up for it at all costs. Needless to say, what happened after its release is iconic ‘80s electro art-pop history. Annie looks amazing in the video. She had recently blurred the male/female gender bending stance with their previous release “Love Is A Stranger,” so the oddly surreal aspect of “Sweet Dreams” was a perfect mind-bending follow-up. This era and piece reflects Dave and Annie in full creative flight, an extraordinary electronic delight and visual masterpiece that will outlive everyone I, and probably you, know. Thank you DNA. Video

Curve “Missing Link”
Because Rose is in it and because it’s a noisy, messy, wet, dangerous, sexy and visually stunning capture. Richard Heslop said, “What about rain and mud?” when we met him and we said, “Yes, please; that sounds good.” The rain machines were huge on this set. The way they are rendered makes it look like some kind of bonkers steel works. Shards of light and filth combine to make the song and visual work as one. You can’t imagine it any other way now and that is always a good sign. I can’t go on too much about how great it is, but I can say it was probably the only video I’ve ever actually enjoyed being part of, and because three-year-old Rose is jumping up and down with a mad smile on her face. Richard said, “Right, let’s shoot the dogs now,” and Rose was like, ‘Oh no, mum, are they are going to kill the dogs?: She managed to bring everyone on set in tune with each other in such a brilliant way, plus the dogs are and were scary as fuck. As Beavis and Butt-head once said: ”Cool …mud … huh, rain … yeah. Huh huh.” Video

The Strokes “Last Nite”
Because we love Julian Casablancas and because this song came at a time where all hope for American music had died as Nirvana were a thing of the past. There will never be another band that will shine as they did and still do. Wrong. This track came out of the blue and floored everyone with an ubercool and fuck-you masterclass. The video isn’t standout in any way other that it has the band in it and they all look fucking perfect. That’s all you want to see, no need for anything else; let’s just swoon as we watch and listen to JC just be JC and sing with that weird fucked-up amp voice and dig the band as they move, love and own everything about being in a band. A life-affirming brilliance just when you needed it. We all (whole family) went to see them at Alley Pally at the height of it all. Rose was perched on a stranger’s shoulders in the middle of the crowd and Julian waved at her and they connected eyes. Rose says it was a moment of supreme and great beauty. That is just one other valid reason why this band and vid are listed. Video

Happy Mondays “Loose Fit”
Of course there are many other sublime Monday moments and songs that hit the mark, but we chose “Loose Fit” because of the combination of all necessary requirements and elements that you must have to make a brilliant song. It’s all there on this track: the roll of it, the head-nodding stoner beat, Shawn Ryder’s swagger, the big fuck-off bass drop, the drug-heavy charms that celebrate the rave and fallout life culture of the day, and then you have Bez off his tits ‘avin it large and loving every moment of it. We like things that stick with you that have a certain and definite stamp of time. This has that. It brings back some great memories of a time filled with youthful creativity that can never be repeated in the same way. This sums up the era, which is exactly what you want from the Mondays. Perfect. Video

Laurie Anderson “O Superman”
Because this is a pure and one-off never-to-be-repeated art-pop masterpiece. It goes against the pop-culture grain in every way. It managed to effortlessly combine a dark menace with a childlike charm of fascination in the world. It takes you away from your world and into Laurie Anderson’s in such a way that you can only be mesmerized by it. The light-up mouth, awesome padded light floor and that O-O-O-O vocoder with that feeling of deep humanity within the delivery is and always will be timeless and out on its own. May this be used as an anthem that unites the world when everything has been completely fucked and broken. It would work for us … every time. Video