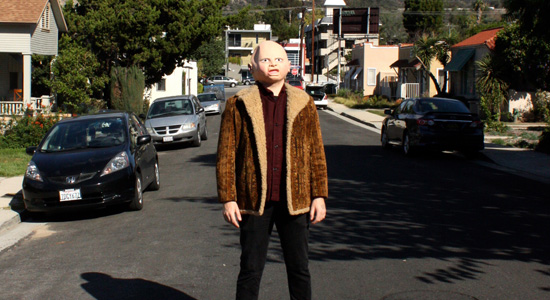 The road between Ty Segall albums is rarely a long one, but that doesn’t mean there aren’t plenty of twists and turns and wolves to encounter along the way. Hot off the heels of a reconvention with his doomy trio Fuzz, Segall returns with his latest “solo” offering. At this point in the San Francisco wunderkind’s astoundingly prolific career, you could easily (though ineffectively) align each new album with sonically similar ones that came before.

While Emotional Mugger dishes out the same kind of taut songwriting as 2014’s Manipulator, the LP is far less mannered. The guttural intonations on the opening “Squealer” and doublewide title track (not to mention the occasional between-song chatter) give Emotional Mugger a seedy, witching hour atmosphere. Musically, Segall’s recent reappraisal of the Ty Rex EPs has rekindled his Bolan-worshipping tendencies. Though there’s nothing too saccharine on Emotional Mugger (even the line “I want your candy” on “Breakfast Eggs” is more of a threat than a statement of desire), the melodies are some of the strongest Segall has ever turned out.

Like they did on 2012’s Slaughterhouse and the two Fuzz LPs, the guitar theatrics come fast and furious on Emotional Mugger. Split-second bursts of neck-tapping punctuate “California Hills,” and “Diversion” carries a searing solo that would make Robert Quine proud. Never one to take himself too seriously, Segall gets a little Syd Barrett-y on “Baby Big Man,” and strikes a Jagger-like bravado on “Mandy Cream.” As always, newcomers looking to get into Segall’s world should start with his newest creation, even if he’s bound to top himself in a few months.