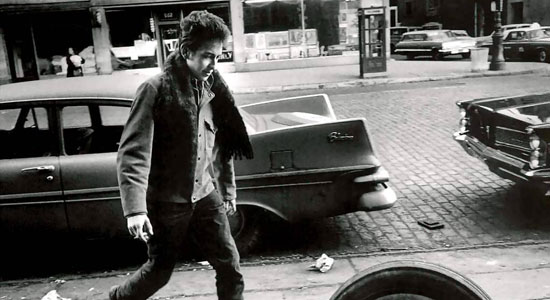 Lawrence: One reason the release of Bob Dylan‘s Basement Tapes Complete was such a big deal was the inclusion of more than an hour of music that had never been previously rumored, let alone bootlegged. There were some good covers (“My Bucket’s Got A Hole In It,” “Ain’t No More Cane”), but most of the new material consisted of sketches, fragments, works in progress. The track that really grabbed hold of me was “Down By The Station,” barely 90 seconds long, one verse and a chorus, distinguished by perhaps the worst sound quality of the entire six-disc set. It’s also the Basements‘ only solo track, just Dylan at an electric piano, no accompanying Hawks. The lyrics are half formed, buried, with a few making their way to the surface: “I was east,” “shadow,” “down by the station.” The melody rises and falls, sad, mysterious. The chords are simple but never go quite where you expect them to. Dylan’s singing is measured and resigned. It’s a haunted performance, “I’m Not There” in miniature. Even the track’s distortion creates the impression of a late-night radio signal, showing up out of nowhere for a minute.