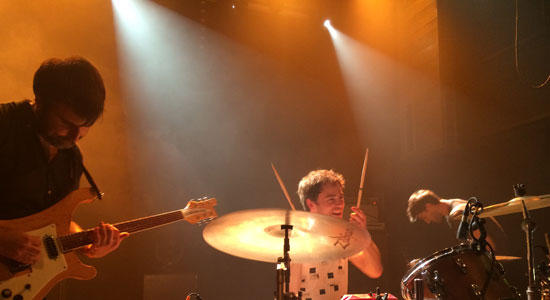 A pantomime horse will not gallop with grace. A Papier Tigre, on the other hand, makes an admirable show of it.

Indeed, disparate parts—be they intended for absurd theatrics or musical compositions—tend to fit together awkwardly. But this post-punk trio from Nantes, France, deconstructs, then reassembles, the rock song to pleasing effect. Imagine a cubist painting set to music. The two guitars and drums conjoin, not clunkily, but Lego-like. One hears each element, each player’s individual contribution, distinctly.

Live, the distinctions are even more pronounced. Seeing Papier Tigre perform is like witnessing Dr. Frankenstein assemble his monster from pilfered limbs. Jagged riffs and sharp, percussive snaps segue into playful, even dance-y refrains. What the Fugazi-esque “Health And Insurance” lacks in cathartic release, it compensates for in the richness of its creativity and the urgency of its dynamics. The band’s precise, layered math rock recalls the soaring emo of Dischord’s most urgent acts and the restless experimentation of Thrill Jockey’s least unlistenable.

A stark exception to the group’s eclecticism is the crunchy minimalism of the nine-minute “A Matter Of Minutes.” Guitarists Eric Pasquereau and Arthur de La Grandière huddle around Pierre-Antoine Parois’ drum kit, and the trio hammers out a repetitive motif that is more Shellac than Don Cab.

This stylistic digression underscores the diversity in their sound. Art punk is a colorful marketplace of ideas, and this band wanders among its stalls with hungry ears and sticky fingers.

Towards the end of the set, Pasquereau busts his high E and then—to entertain the crowd while he restrings—relates an anecdote. Two Tinder users had apparently “liked” one another because their profiles both declared an appreciation for Papier Tigre.

Not exactly music you’d fuck to, but disparate parts can indeed fit together … to pleasing effect.