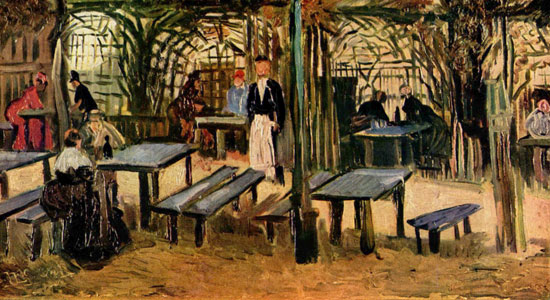 Stringfellow: A subtheme in my participation here as guest editor is “living the good life.” Jon and I have lived abroad for a long time, and although I can say that France is not a paradise through and through—red tape, bad traffic, pretentious wait staff, high taxes, dog crap—they do a few things extremely right. (And I’m not talking about the extreme right party, Front National, that currently holds the mayorship in Jon’s summer home town of Frejus.) The guinguette is a concept that pops up here and there in France in the warm months, roughly from end of May to the end of September, but subject to local variances. It’s an open-air bar, gathering point, dancing place, etc., that should recur in the same spot year after year, but has little permanent structure. It should be near some kind of water, most commonly a river. There should be music and dancing that’s appealing to all ages—especially old folks. Basically, you cool your jets with some cheap wine, cheap food and friends, and then, at some point in September unannounced, it packs up and disappears without a trace. Brilliant.