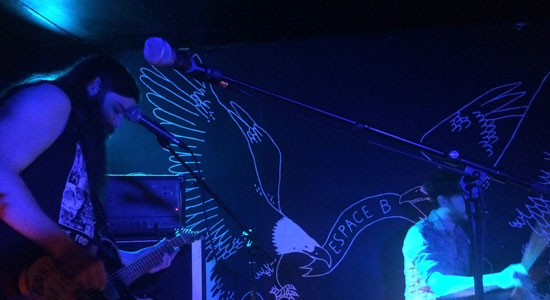 Rockaeologists, their trowels and hand brooms unveiling secrets buried deep within fossilized turntables, have determined that during its mid-’60s origins, psychedelia initially embraced peaceful, colorful expressions of love and mental awakening. Listeners fed their heads, kissed the sky, then broke on through (to the other side).

Today, however, the genre often strives to pummel the senses rather than awaken them. Perhaps the drugs have changed. The times they certainly a-have.

Tonight’s show—held not in a flowery field in sunny California but instead a poorly ventilated coffin on the fringes of Paris—attests to this radical evolution.

Opening act Noyades offers a deliciously violent take on acid rock. One hears Harsh Toke recreating Hüsker Dü’s Land Speed Record and Japanoise merchants reimagining Hawkwind. The band name is French for “drownings”—an apt description of the Lyonnais trio’s sound and its effect on the crowd. All instrumental, the group’s music is a thrilling, white-knuckled ride through thrash-y hardcore and frenzied metal, all awash in feedback, reverb and squalling guitar solos.

While Noyades feels like a mad dash, headliner the Cosmic Dead is a test of endurance. The Glasgow quartet’s free-form space jamming is a warm mush of psych-metal drone. The performance is driving, ferocious and hypnotic. The keyboards lend an experimental krautrock flair, alternately accenting the band’s robust riffing with spacey sound effects and washing it all down with white noise. The payoff is considerable: One is satisfied and spent, deafened and dumbfounded.

Art, at its finest, opens one’s consciousness to new possibilities, broader perspectives. Both bands on tonight’s bill aspired to, and more often than not achieved, this noble goal. Their ancestors from the psychedelic Pleistocene heightened the senses with finesse, while tonight’s performers dulled them with force.