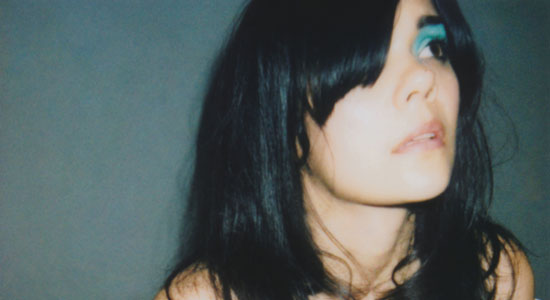 Bat For Lashes’ Natasha Khan says “I do” with The Bride

It might be the cheesiest of all showbiz clichés, but for Natasha Khan, the words ring uncannily true: What she’d really like to do is direct.

Ever since this Renaissance woman hung out her shingle as gothic-edged alt-rocker Bat For Lashes with 2006 debut Fur And Gold, she’s mastered every artistic medium she’s attempted, including one full-length foray into psychedelic covers last year as Sexwitch, a band she formed with Dan Carey and the group Toy. She studied modern dance, then utilized its rhythms to compose and choreograph elaborate routines and videos for her last, and third, effort, 2012’s The Haunted Man. Recently, her keen eye for fashion led to her own breezy daywear collection for YMC. “I was more into the patterns of the fabric, because I just love making things,” she says.

Naturally, the Brit decided to shoot—and star in—a mini-movie to accompany the collection Under The Indigo Moon, with a soundtrack she composed with Beck. Khan has also penned a short-film script, Gotcha, which she plans to helm once she wins her studio argument for final-cut rights. Then there’s her first official 15-minute featurette, I Do, which premiered at the Tribeca Film Festival in New York, a Joyce Carol Oates-ish fable of a fiancée who impetuously rides off with an inviting stranger on her wedding day.

“He represents the ghost of someone she’s lost in the past,” she says. “It’s quite surreal and set in the English countryside.”

But I Do isn’t directly connected to The Bride, Khan’s most ambitious undertaking to date, which is at once her fourth album, the operatic soundtrack to a full-length feature she’s writing with plans to direct, and a deep, philosophical musing on the tradition of marriage itself. Song by song, it documents a woman waiting at the altar for a groom who never arrives—he dies in a car crash, en route, sending her on a journey of self-discovery that begins with the opening harp-plucked “I Do,” ends with an optimistic “I Will Love Again,” “In Your Bed” and “Clouds” and even includes a tryst with an alien lover (“Close Encounters”).

Bat For Lashes has already begun staging The Bride in churches like London’s Union Chapel, wherein she walks down the aisle in a blood-red wedding dress and throws a bouquet of flowers to the congregation/audience (who are urged to wear formal attire) before playing nearly all the album, followed by a second set called Treats that includes catalog classics like “Marilyn,” “Horse And I,” the Carpenters’ “We’ve Only Just Begun” and her Ivor Novello Award-winning breakthrough hit “Daniel.”

The singer had such a panoramic vision in mind, she knew exactly where to gestate her Bride. With producer Simone Felice, she retreated to a mountaintop house in New York’s Catskills and converted it to a studio. “We cleared out all of the furniture and brought in a big mixing desk, vibraphone, celeste, harmonium, drum kit, guitars, everything we needed to play,” she says. “And there was a big fireplace so we could make fires and get the candles out, and a huge dining table so I could cook for all the musicians that came by. And there were deer all around, and forests and fog and chipmunks and squirrels. It was peaceful, and the perfect setting to invite people in to the world of The Bride.”

In retrospect, Khan reckons she was always headed toward cinema. At 16, the avid Kubrick/Polanski buff started making arty home movies with her boyfriend at the time before turning her attention to nature and shooting footage of snow-sprinkled Canadian geese on the lake near her Hertfordshire home. By 18, and at her professor’s urging, she was making triptych films in art school.

“Then, I guess I always kept at it through doing music videos,” she says. “I’ve always had a very strong involvement in the film treatment and always collaborated quite closely with the directors to make sure I got what I wanted. And it kept me going for a while.”

With the multimedia Bride project, the auteur is taking that Hollywood cliché and running with it. “My desire just got too strong, and I had to get back to film,” she says. “I want to make a feature, work on shorts and animation, and really get back into that visual language again.”