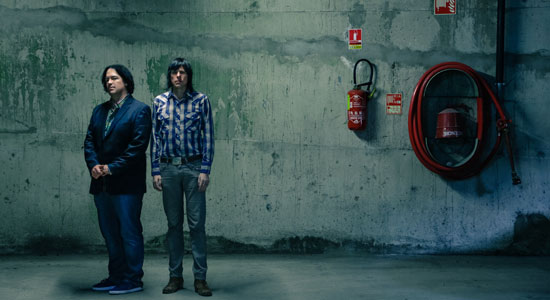 “We haven’t broken up yet. But if we broke up today, we might disappear.”

Such were the sentiments of the Posies’ Ken Stringfellow in an interview with yours truly that’s exactly 20 years old this month. Back then, he and Jon Auer were at the end of their tenure with Geffen, frustrated that the label was doing little in the way of promoting 1996’s Amazing Disgrace. The two would part ways in 1998, only to reunite several years later.

“I think our fans are impressed that we’ve kept going,” says Auer, as he and Stringfellow prep for a secret gig in support of Solid States (MyMusicEmpire), the Posies’ eighth album of original music in 30 years. “People are still quite shocked that we still put as much energy into it as we do.”

In about 45 minutes, the two will join drummer Frankie Siragusa for an exceedingly loud set heavy on new material for an audience of about 60 fans in an out-of-the-way recording studio in the upper-middle-class borough of Haddon Heights, N.J. Solid States is the Posies’ first new collection since 2010’s Blood/Candy, and the circumstances surrounding its conception couldn’t have been more different from those of its predecessor. First and foremost were the double-gut-punch deaths of two longtime band members: drummer Darius Minwalla in 2015, and bassist Joe Skyward earlier this year. There was also a divorce and a remarriage for Auer, who, like Stringfellow, now lives in France.

Life-changing events aside, Stringfellow cites key differences in the creative process that led to what Auer describes as some of the Posies’ most “adventurous” material. “We didn’t track this record with a band at all; it’s totally ‘put together,’ in a sense,” says Stringfellow, as he tinkers with the wiring below the keyboards he’ll be hammering away on during the show. “It’s a jam-free album— and people only have issues with that if they have some sort of fantasy about what we should be doing.”

“Honestly, we weren’t going to use any real drums at the start,” says Auer. “But then we did a series of shows as a duo, and we missed that visceral quality.”

Keyboards figure heavily on the album, to the degree that it’s been described as a significant departure. And it is—sort of. The Posies’ classic melodic sensibility and pristine harmonies filter through the busy, tightly constructed fabric of the songs, providing a template that’s fresh yet familiar. “Even when we try to do something different, it winds up sounding like us,” says Auer. “We could do a reggae record and put our vocals on top, and people would still be calling us power pop.”

Also not lost on the Posies: The realization that they’ve basically come full circle in the 28 years since their debut, Failure—which was recorded at Auer’s home studio in 1987 and 1988—or the seismically ridiculous differences in the industry that have occurred since their first and only official breakup in ’98. “There was a lot of waste in those days,” Auer says. “The money was there.”

To be exact, the Posies spent a quarter of a million dollars to make Amazing Disgrace, says Stringfellow. By comparison, Solid States cost 50 grand. “And that includes manufacturing and publicity,” he says. “And there’s one more factor: We’re so much more adept in the studio now. We get to the heart of the matter way quicker than back in the day.”