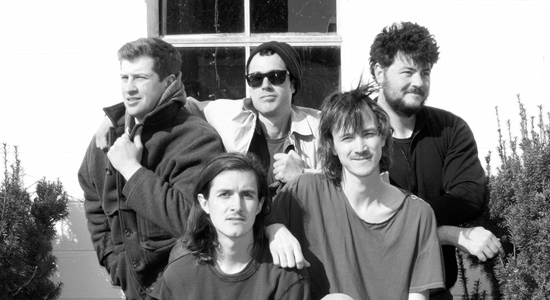 The Felice Brothers set the tone for Life In The Dark on the album’s second track, “Jack At The Asylum.” Ian Felice describes the observations of an inmate dancing around the loony bin to a fractured waltz while a TV constantly displays the worst images of the 24-hour news cycle in the background. When the band adds its ragged harmonies to the chorus (“America, you give me nightmares”), you know you’re in for another journey through the tortured landscape of a nation slowly being torn apart by its internal contradictions. A divorced father bids farewell to his wife and broken family on “Sell The House,” a wrenching lament with Felice’s matter-of-fact heartbreak intensified by Greg Farley’s weeping fiddle.

“Diamond Bell,” a ballad about a murderous woman outlaw, slips along on a funereal Tex-Mex beat with James Felice supplying low-key accordion fills. That instrument also dominates the album’s brighter tracks: “Sally” is a bouncy Cajun-flavored instrumental driven by Josh Rawson’s propulsive bass and reggae-like accents on the up beats, while “Aerosol Ball” is a stomping two-step with incomprehensible, tongue-twisting lyrics. The album was cut on vintage equipment in a small garage that the band turned into a recording studio, and the result is another set that perfectly captures the scruffy energy of its live shows. The Brothers are still singing about the lives of ordinary people, but their vision is a bit darker—or perhaps more realistic.