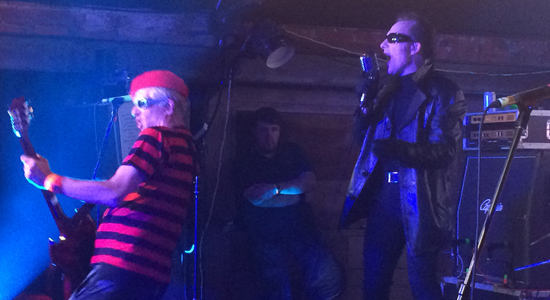 For some, punk is a lifestyle, an ethos. It can even be a social movement, typically one that rejects reactionary forces.

For others, it’s just an excuse for a bit of good, clean fun.

“Did you get urinated on?” Captain Sensible, guitarist for the Damned, is reminiscing about the debauchery of his band’s glory days in the late ’70s. “Are you here to ask for your money back?”

Victims of golden showers or not, fans of this legendary punk band have no grounds for complaint. Among the founding forefathers of punk, the Damned is the most accomplished musically, the most bracing sonically and the most ambitious creatively. Over the course of 40 years, the group has pioneered punk and goth and perfected pop and psychedelia. Tonight’s set opener “Plan 9 Channel 7” exhibits the full breadth of this versatility: The song blends hard rock and goth punk, with Dave Vanian’s smooth vocals bridging the gap to pop bravura.

A long string of unavoidable hits, many plucked from the classic first and third albums (Damned Damned Damned and Machine Gun Etiquette), follows: including “Love Song,” “Second Time Around,” “One Of The Two,” “Fan Club,” “Noise Noise Noise,” “I Just Can’t Be Happy Today,” “Anti-Pope,” “Neat Neat Neat,” an exquisite rendition of “Melody Lee” and, of course, the irresistible “New Rose.” Covers of Barry Ryan’s “Eloise” and Love’s “Alone Again Or,” along with iconic original “Smash It Up,” are touching yet energetic. The execution throughout the evening’s nearly two hours is impressive: tight, powerful and urgent.

Halfway through barnburner “Ignite,” the band silences its instruments and hands the vocals over to the crowd. The pit hungrily a cappellas the “whoa-oh-ho’s” until the musicians take back the baton and sprint to the finish. The moment underscores the band’s generous relationship with its fans. Where the stage once overflowed with piss, it now gushes with comradery and playful banter.

Occasional technical hiccups (false starts, lights/amps winking out) incite Sensible to blame them on the Anti-Nowhere League. With a smile, he then wonders if such boners would occur if the Damned inspired greater respect: “This wouldn’t happen to Paul Fucking Weller, would it?!”

Perhaps not, but broader recognition doesn’t imply greater skill. These original punks never aspired to greatness. They vented their rage while having a laugh. And yet in the end, they created something approaching genius. For a group that once entitled a live album Mindless, Directionless Energy, its career has indeed been full of sound and fury. But it has rarely signified nothing.