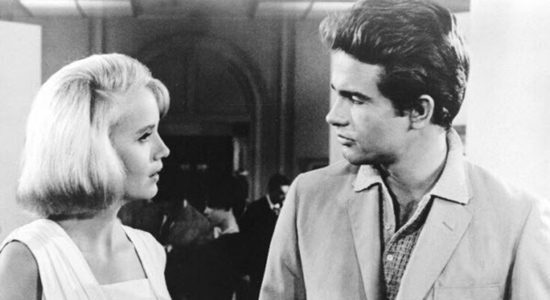 Who would have thought you’d ever run across an all-but-forgotten little gem of a movie that features two of the red-letter performers from On The Waterfront (Eva Marie Saint and Karl Malden) and a pretty decent replacement for Marlon Brando in a bad-ass, very young Warren Beatty? Berry-Berry Willart (Beatty) is the no-good older brother of Clinton—played by the teenage, died-too-young Brandon de Wilde, a budding star in the early days of TV.

It all takes place in southern Florida’s claustrophobic Keys region where it feels like a slight misstep would land you into the briny. The heat and humidity are palpable throughout this land of single-lane bridges. Clinton has made his way down to the end of Florida to beg his idolized older brother to come home to mom and dad in Squaresville, Ohio. You get the feeling Berry-Berry (admittedly a pretty lame moniker) would rather join the Marines than return to his roots. The screenplay was penned by William Inge, a very hot commodity in the ’50s and early ’60s (Picnic, Bus Stop, Come Back Little Sheba) with lucid direction by John Frankenheimer.

Clinton arrives in some small town in the heart of the Keys via the Greyhound bus to find his brother and heads for the white-washed Victorian hotel to make enquiries about his whereabouts. “If I was the brother of Berry-Berry Willard, I wouldn’t be bragging about it,” says the hotel manager, brusquely waving Clinton off in the direction of a seedy strip club at the end of the pier and well known as one of Berry-Berry’a haunts. “Ask for Hedy and maybe she’ll tell you where to find your brother, and maybe she won’t,” he says pevishly.

Pulling the hair off her forehead, Hedy (Evans Evans) shows Clinton a two-inch scar. “That’s what happened to me when Berry-Berry threw me clean across the room and into the television set,” she says. The kid is tossed from the strip joint by the armadillo-like woman who runs the joint. “You want me to lose my license because of a dumb kid like you?” she bellows while pointing to the front door.

Hedy runs after Clinton and catches up to him down by the boat where they’re uynloading this afternoon’s catch of tuna. She tells the young kid to explain to his brother that she’ll take him back anytime, that she bears no grudge against Berry-Berry, then kisses Clinton on the cheek and goes scurrying aback to the strip joint. The two hundred bucks the kid has brought with him to ferry his brother home must be used, instead, to bail him out of the local pokey on an assault-and-batterty charge. Then, as expected, things get even messier for Berry-Berry Willart.