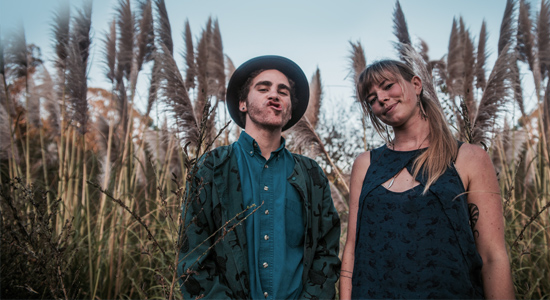 Getaway Dogs inhabit their own starry-eyed universe, drifting along to the tropical pulsation of big bossa-nova guitars, shimmering intergalactic keyboards, somnambulant vocals, whispered percussion and bright, buoyant melodies. Singer, songwriter and lead guitarist Kai Killion was born in the United States but didn’t get serious about music until he spent two years with his extended family in Brazil.

“I grew up with Brazilian jazz, bossa nova, samba and pop, as well as classic American rock and folk,” he says. “I also listened avidly to neo-soul, hip hop, indie pop and psychedelic rock. I found it difficult to stick with just one genre. That’s how I ended up with the sound Getaway Dogs has.”

When he moved back to Santa Cruz, an artistic nexus on the California coast, Killion started playing his songs on the street and at open mics. A few years back, he made a solo album called Mermaid Legs & Getaway Dogs. It was a raw, acoustic effort that featured the luminous harmonies of his pal Samantha Stone, but it didn’t capture the sounds he was hearing in his head. Killion returned to the studio and, over the course of the next two years, put together Lost In The Ebb, the first proper Getaway Dogs LP.

With a small coterie of like-minded souls, Killion made a record full of dreamy, late-night psychedelia that spins a calm, soothing spell. True to its title, the music ebbs and flows, with Killion’s guitar filigrees floating through whirlpools of ambient sound to support his gently surrealistic lyrics and Stone’s sublime harmonies.

“I recruited Samantha to sing on a couple songs the second time Getaway Dogs played live,” says Killion. “She brings the soul to our sound. We share the same taste in music and a love for channeling nature into our expres-sion.”