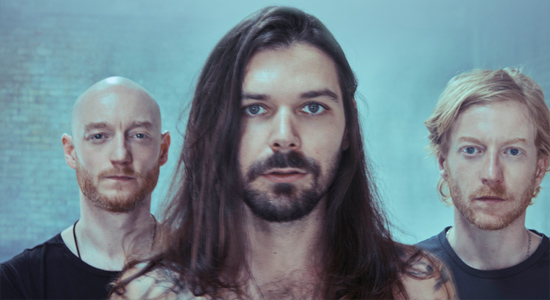 Exhausted from the road, Biffy Clyro went dark for a year to conceive the high-wattage audio circus of Ellipsis

Two years ago, Glasgow-based indie-rock trio Biffy Clyro found itself at the slippery end of an unknotted rope. The band had recently completed five solid years of touring—two on its last album, 2012’s acclaimed double set Opposites, preceded by a three-year stint for 2009’s Only Revolutions—and was understandably crispy around the edges. When guitarist/vocalist Simon Neil began the songwriting process for a new LP, he immediately flipped into road mindset and tried to conceive songs that would work on the festival stages Biffy had been playing in Europe. When his creative juices dried up, he realized his folly, and the band announced that 2015 would be a “quiet year.”

“The main aim was to make music without pressure of shows or release dates,” says Neil in his brilliantly thick Scottish brogue. “I wanted to embrace the joy of making music and not worry about if the songs were fantastic or not. Every song you write is not a golden one. I struggled to feel inspired for the first time following the tour of Opposites, so we felt that we needed to go home and connect with our friends and family again and live fairly normal lives, where we could actually say to people, ‘We’ll see you next week.’ It’s the little things that have been out of our reach for the last 10 years.”

Biffy Clyro’s hiatus yielded big dividends, given the results of the new Ellipsis, named after the three dot punctuation that’s typically used as a placeholder for something left unsaid. Neil admits the title holds particular meaning for the band.

“Normally, an ellipsis happens at the end of a sentence,” says Neil. “We disappeared for about a year and didn’t play any shows, and I feel like people are joining halfway through the thought process. It’s definitely relevant to the record.”

With Ellipsis being Biffy’s seventh record, Neil and his bandmates for the past two decades—bassist James Johnston and twin brother Ben Johnston on drums—wanted to make sure that they weren’t becoming too predictable. Ellipsis covers familiar sonic territory for Biffy—blistering hard melodic rock with a touch of ’90s alternativity and a quick taste of sweet-tart pop—while offering a furiously contemporary energy.

“I wanted us to formulate a plan and find songs that felt like we were saying something fresh and also felt like the best songs we’d ever written,” says Neil. “Sometimes all you need for that is time and patience. We were fortunate we had the flexibility to let it gestate and bloom a bit of its own accord. I needed to put my ego to the side and reconnect with being a teenager again.”

After a two-month vacation with his wife in California, Neil returned to Glasgow, and he and the Johnstons practiced five times a week, returning to a head and heart space until the songs for Ellipsis felt strangely like Biffy’s birth in 1995 when the trio was still in high school.

“We don’t want to be a band that necessarily makes the same record over and over,” says Neil. “When I look at AC/DC, I love them so much because of that exact reason. But for me, I feel like my mind is a bit too tumultuous for that. I’m always looking for the next challenge, and I quite like challenging our fans as well. Our fans are an incredible bunch of people. They really understand their music, and I think they enjoy being taken on a wild goose chase. That’s quite healthy.”