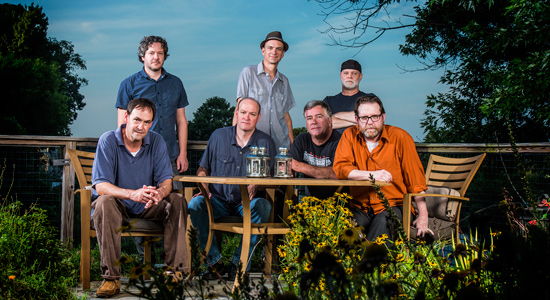 If there was ever a poster band for the college-rock aesthetic, it’s the Connells—if only for the fact that they always presented themselves as so unassumingly, well, collegiate. Founded in 1984 by University of North Carolina students Mike and David Connell, the core quintet realized early on that efforts to disguise its clean-cut averageness and adopt any sort of arty, self-important posturing could only lead to deception, silliness and, worse yet, R.E.M. comparisons. Instead, the Raleigh-based outfit focused on the music, reeling off a string of cleverly composed, overtly Anglophilic jangle-rock gems that, to this day, beg for wider acceptance.

Out today, Stone Cold Yesterday: Best Of The Connells (The Bicycle Music Company/Concord Music Group) marks the acquisition of the Connells’ entire TVT catalog by The Bicycle Music Company, so one would hope that this is only the beginning of a series of reissues that will bring this undervalued band some belated recognition and respect. It’s tough to imagine what the Connells might’ve amounted to if lead singer Doug MacMillan hadn’t abandoned his faux-British accent and locked into the delicately soulful charms of his upper register shortly after the release of the band’s 1985 debut, Darker Days. His vocals are as integral a part of the band’s sound as Mike Connell’s innate pop sensibilities and George Huntley’s clever guitar lines.   MAGNET checked in with Connell and MacMillan to get their take on the new compilation and the potential for renewed interest in the band’s music.

MAGNET: Congrats on the new deal with The Bicycle Music Company. Was it difficult getting your back catalog from TVT?
Mike Connell: TVT’s entire catalog was in limbo for years. They didn’t want to break it up, but Bicycle was able to come along and do what it took to acquire the label’s entire catalogue. We were a part of that—long story short.
Doug MacMillan: What a great day that was. It was so frustrating for so many years.

Was TVT a mismatch?
Connell: In 1987, TVT was basically a two-person operation. At that point, they’d licensed the Saints from Australia, and we were the first band they signed. It was a clean slate, so it wasn’t a mismatch at that point. Obviously, what TVT became was quite different. To their credit, they carved out a niche for themselves with Nine Inch Nails right on down the line.
MacMillan: In hindsight, the problems we had with TVT weren’t that much different than anything bands experience with any other label—the day-to-day arguments, the differences of opinion. A lot of bands got signed to major labels back then, but six moths later, the A&R guy who signed them was gone and nobody knows who they are. So it’s frustrating either way. But it was good because Ring turned out to be great.
Connell: It did get to the point where we tried to get off the label, and Capricorn was standing in the wings—around 1991 or ’92. We tried; we weren’t happy. Then, we went in with Lou Giordano and made the Ring record, and we had some luck with one. Things got better [with TVT] for a while—until they weren’t anymore. [Laughs]

It really does seem like the Connells peaked in every way with Ring.
Connell: Yeah, I’d agree with that. Doug was writing some great tunes on that record, and it had a pretty good flow. Lou was meticulous and drove us as hard as we were going to be driven.

Choosing singles for the new compilation was an obvious way to go, but it does leave out some great contributions from original member George Huntley.
Connell: Yeah, that seems to be the way they went about it. We didn’t have any input, and I don’t endorse every selection they made—but I’m not trying to be critical. George’s songs weren’t treated as singles, but he should’ve had a tune on there—or more. But I took it as a decision by the people who were in the position to make that decision. Still, I would’ve come up with a different list.

Speaking of George, I hear he’s doing quite well in real estate these days.
Connell: Yeah, he’s keeping busy at this point. The real-estate market in this part of North Carolina is robust at the moment. A couple of years ago, we played a 30th anniversary show here in Raleigh, and he joined us for four songs that night. It was the first time he’d played with us in maybe 15 years. It was like riding a bike. I don’t know if he would want to be involved at this point. If he was going to, I feel like it would’ve been a couple of years ago.

It seems like there’s no middle ground with you guys. Either people have now idea who you are, or they’re desperately committed to the band. How do you view your relationship with your fans?
Connell: I’ve always marveled at how enthusiastic and supportive our friends and fans have been. It’s humbling. There’s a world of incredible music out there, and you’re choosing to get excited about us? I feel very fortunate.

You’re pretty average dudes. People see that. They see you go onstage dressed like you just walked off a college campus, and you make this incredible music. Maybe they see themselves in the Connells—at least, more so than in other bands. You offer hope for regular guys. [Laughs]
Connell: I’ve never really thought too seriously about it, but that makes sense—I like your theory a lot. A couple of bands came around in the ’80s that wore street clothes. None of us had any ideas or talked about what we were going to wear.

Every fan seems to have a different favorite Connells album. Which one are you most proud?
Connell: As far recording and touring, Ring—I really liked that album a lot.
MacMillan: Ring gets my vote, for sure.

One of the most interesting things about the growth of the Connells came early on, when Doug completely changed his vocal approach—for the better, one might add—after Darker Days. How did that come about?
Connell: On Boylan Heights, we made a conscious effort to get Doug into a higher register.
MacMillan: I was trying sing like Ian McCulloch and Morrissey on Darker Days. I didn’t know what I was doing—I was clueless. It’s amazing what getting out there and playing will do.

And then there were the amazing lead guitar lines. They were catchy as hell, and for a while there, it seemed like you had an endless supply of them.
Connell: I have to give credit where credit is due: That was Huntley. He came up with the majority of that single-note stuff. At the time, I don’t think I fully appreciated some of the stuff he was coming up with.

What’s the plan for additional reissues moving forward?
Connell: That’s a great question, and I don’t know the answer to that. I’ve always assumed that they would reissue the full catalog, and I hope so. All we know about right now is this compilation, and we’re going to try and get out and play some to support it.