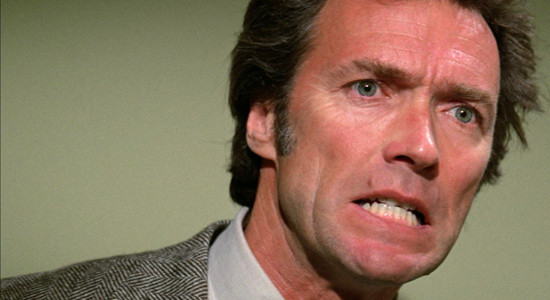 OK, OK, so the guy is one of the few celebrities who says he’s supporting the candidate everyone wishes would disappear up his own rectum: Trump The Disgusting. But surely Clint Eastwood, starring in the original foursome of Dirty Harrry movies as well as a career notched with plenty of fine directorial jobs, makes up for some of that.

No doubt, you’ve seen the 1962 debut of Harry Callahan as San Francisco’s “no bullshit” cop, the one who’s taken on the dual roll of lawman and executioner, saving the public a boatload of tax dollars by elminating a speedy trial from due process. The Enforcer is the third movie in the series, one you might have missed. As Harry Callahan would put it, “Not a real good idea.” Other films may have assumed a simiilar stance, but like a horde of grumpy Mormons on your front porch, the original is still the greatest. Just look deeply into Clint’s bloodshot eyes and tell me he’s not the best, Trump or no Trump.

Dirty Harry pix don’t waste any time. Harry and his partner have just come upon a couple of thugs sticking up a civic center district liquor store, and our boy already has a plan. He leaves his 44 Magnum (his trademarkl handgun of choice) on the roof of a cop car and immediately walks into the liquor store, cool as sour-cream milkshake.

The frantic bad guy, holding a woman in front of him like a shield, forces Harry to lie on the floor of the shop. “This is my new sports jacket,” Harry objects. The bad guy says he wants all the “pigs” out of the area and a car to get away. So who is Callahan to object? After getting a kick in the ass from the punk, he walks back to the police barrier and puts the pistol back in his pocket. “What did he say?” asks his partner, Frank DiGiorgio (John Mitchum). “Said he wanted a car,” says Harry “So what are you gonna do?” “Give him one,” says Callahan who hops into his unmarked police cruiser nearby, revs it up, and drives full speed through the liquor store’s front window.

Harry has jumped from the vehicle and put a couple of slugs through each of the perps before the tires have stopped spinning. “What makes a man crazy enough to join the cops?” asks DiGiorgio as Harry holsters the Magnum. He knows he’ll have to face the wrath of his boss (Bradford Dillman) tomorrow for use of excessive force, but today felt good. “You find out, you let me know, huh?” snipes Callahan.