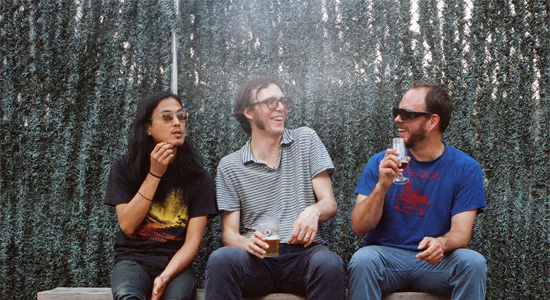 Rhyton pours out the cosmic boogie

Nothing is fixed in Dave Shuford’s musical universe, but balance must be maintained. The Brooklyn-based multi-instrumentalist digs the structure of roots forms like the trucker C&W of his Georgia youth or the Greek folk music of his ancestors, but he also thrives on improvisation. In 2009, the rollicking D. Charles Speer & The Helix covered the first pole, but the No-Neck Blues Band, his main outlet for freeform flight, was headed for a lengthy layoff.

“I wanted to make sure I had a safe haven for the more abstract realm,” says Shuford. So he founded Rhyton, which is named for a horn-shaped drinking vessel often found in Greek archaeological digs, with bassist/electronic musician Jimy SeiTang (ex-Psychic Ills, Stygian Stride) and original drummer Spencer Herbst (since replaced by Rob Smith). The trio’s first four LPs extend the reality-blurring explorations of groups like Pärson Sound, Edgar Broughton Band and Chrome into realms of Anatolian mystery and Hendrixian distortion.

But then the Helix went on ice, sidelined by a couple of members’ burgeoning film/TV production careers and the arrival of Shuford’s son. Around the same time, SeiTang and Smith embarked upon a major R&B listening bender. The poles didn’t so much reverse as bend and meet to form a perfect circle on their new album Redshift (Thrill Jockey). Shuford has stepped up to the mic, and the jams occasionally cohere into songs. The title tune flows easily from cosmic country shuffle to lunar electronic space-out, and there’s a boogieing take on Joe Walsh’s Watergate-era anthem “Turn To Stone.”

“It was a lot of fun to explore some cleaner guitar sounds, interlocking keyboard grooves and group vocals,” says Shuford. “Plus the lyrics reflect major disillusionment with the political establishment, a theme that is as resonant as ever.”