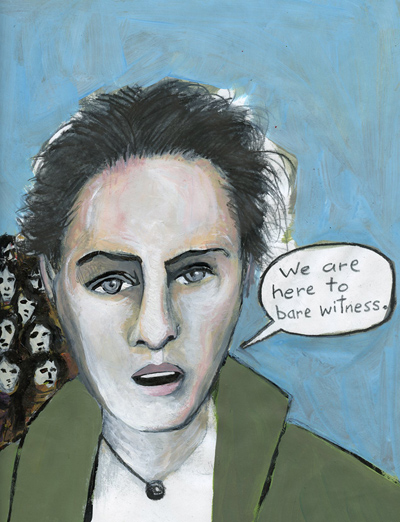 While Mecca Normal was on tour in 2014, Ian MacKaye (formerly of Fugazi) came to our show in D.C. and somehow ended up telling me that this is his favorite song off The Observer album. It’s a weird one to pick, because basically it’s just me singing and playing the piano, which was recorded after the guitar and vocal tracks. There was something David liked about the piano and voice, and he was all for taking the guitar out all together, making this the only Mecca Normal song without his guitar! He’s there in a way, because I’m playing piano to his guitar.

The Caribou And The Oil Pipeline
You’re in your car.
You’re running out of gas.
You pull in to get the gas.

You’ve see it on TV—there’s nothing you can do.
You can’t change the world, so you change the channel.
But in your mind, one fact stands alone:
this is for 180 days of oil
versus 20,000 years of caribou migration.

In a dream you see the caribou crossing an icy river, exhaling steam,
they dream themselves up and over steep and barren hills.

I didn’t think I could write a hit
about the caribou and the oil pipeline, but I had to try.

You’re in your car. You’re running out of gas. You pull in to get the gas.
What if? What if?

“The Caribou And The Oil Pipeline” from the album The Observer (Kill Rock Stars, 2006) (download):