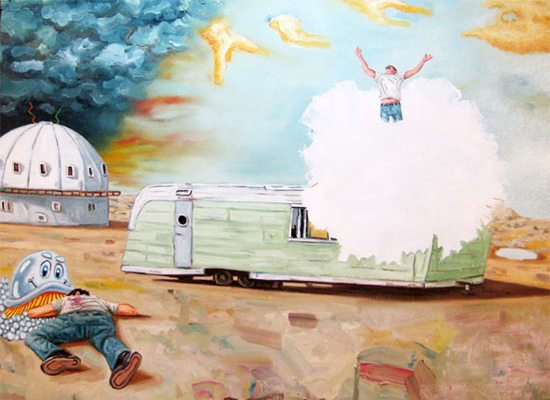 Magnuson: Artist Jesse Wiedel and I first met on MySpace. (Yes, that was a long time ago; at least in “internet time”). We initially bonded over the surreal paintings of Dan Attoe. Then I got a look at Jesse’s art I immediately became a Wiedel fan! Jesse graciously agreed to answer a few questions regarding the hallucinogenic (and frequently nightmarish) quality of his work.

Ann: Jesse, I fell in love with your art the minute I saw it! It reminded me of Jim Shaw, Mike Kelly, Robert Williams and … well, no one else. You really capture the sense of the psychedelic in everyday life as well as the decay of the American Dream. Which is why your last series, “The Ugly American Dream,” is one of my favorites. When did you first start making art? What inspires you? Dreams must be part of it, right?
Jesse: Thanks, Ann! It’s great to be compared to those great artists. I have been making art since I was a little kid. Early memories from grade school include getting in trouble with teachers for making gruesome art and getting attention from girls who would ask me to draw pictures of horses for them. I graduated from art school in 1988 and have been painting and exhibiting regularly since. I am inspired by mysterious places that are decaying and on their last legs, or simply abandoned altogether. I like to speculate about what might have caused their downfall, and then make improvisations based on these thoughts. I don’t know if it is dreams so much as lack of dreams that inspire this improvisational approach. I am kind of a light sleeper, so don’t get to dream as much as I’d like. I don’t remember my dreams very often. But when I do, they are pretty dramatic, and include tidal waves and burying bodies in the woods.

You live in Eureka, and the bizarre world of Humboldt County comes alive in your work. Can you explain what it is up there that makes it, well, so nuts? Judging from your paintings Meth Mouth and Meth Mouth 2, a lot comes from the general decay of the U.S. economy and rampant drug addiction.
It does seem to be getting harder and weirder to be a poor, working-class person. People can’t pay the horrible rent prices anymore, so they have to improvise a lot, with van living and long-term camping scenarios. Some strangeness here, I think, is that the cannabis industry has replaced the lumber and fishing industries pretty much as the main source of revenues here, and it’s still mostly illegal, so there’s some residual paranoia in the general psyche of the place. It is also pretty isolated geographically. It is quite a trek to get to any city from here. I tend to concentrate on the strange and negative aspects of the place, rather than the scenic beauty, which we have here with the redwoods and beaches that the tourists flock to each summer. Humboldt is one of the most beautiful natural places on earth. But there are just so many people painting that pretty shit—nearly everyone in my town is, in fact.

You actually find ways to make your more hopeless characters transcend their circumstances, via visions or magical realism. What are your favorite recurring elements? I personally enjoy that happy soap bubble brush. I can’t remember the toilet-cleaner product that image comes from.
The Scrubbing Bubbles? Yeah, I like to use a lot of commonplace items and elevate them to a magical status. We all have these media images in our head that we’ve gown up with—images that we just can’t shake from our minds. Scrubbing Bubbles, Mr. Clean, the Pillsbury Dough Boy. These cheerful representatives of corporate America will haunt our collective imaginations until we die! Regarding the people I depict, I try to keep them looking real, like the regular folks one finds at the liquor store, Costco or Wal-Mart, and then reorient them into some sort of dilapidated phantasmagoria. My scenarios are kind of like 21st century versions of swirling 17th century baroque paintings—just substitute the fine-looking naked Romans eating grapes and Putti floating around in the clouds with my own roiling cavalcade of contemporary drifters and ne’er-do-wells. I try to be stealthy when photographing places to reference in my paintings. I try not to photograph people for source material, because it just seems intrusive to me. I have to re-create the people according to memory, using found imagery, or pose myself.

There are elements you keep returning to: religious tract pamphlet imagery, skid row scenes, wrestlers, comic book characters …
A lot of that stuff is from crummy and dilapidated comic books I had when I was a kid, and still somehow held onto. They all have missing pages, so they don’t make much sense and I can’t really follow the narratives. These comics are more like Twilight Zone-type stuff than superhero imagery, for the most part. In my paintings, I like to see what happens when I juxtapose flat forms alongside three dimensionally modeled ones. The religious imagery in my pictures was baked into me from being raised Catholic. All that grim, religious-death-trip imagery is scary, but pretty cool once you’ve stood back from it for some years. When Jehovah’s Witnesses pay me a visit, for example, I don’t discourage them because I really dig the imagery in their pamphlets and sometimes incorporate it into my paintings. Also, for many years I’ve been collecting “biker” magazines and incorporating biker party images into my pictures. It’s good to see photos of people just standing around with drinks and guts and beards. You know, regular old ugly Americans watching and cheering on the end of days.

Has anyone every gotten mad at you for some of the intensely honest depictions of American decay you’ve portrayed?
Yes, I have gotten some people angry at me about the imagery over the years. Mostly the religious stuff is hard for people who are strict believers to accept or see the humor in. People used to come to my shows and just looked completely appalled while viewing the works. I have got a lot of surprising acceptance, though, too. One time a police officer came to one of my shows and totally dug it. He said, “Wow, these are the people I work with every day. You really nailed it!”

Any favorite dream paintings by other artists? Dream films? Dream sequences? Dream music?
Dorothea Tanning immediately comes to mind when thinking of dream paintings. Her work is truly haunted. I am currently reading a really inspirational novel by her that is called Chasm. A dream film that I love is called Dementia/Daughter Of Horror from 1955.

I love that movie!
It is silent and just gives off such a sinister vibe with all that discordant imagery of severed limbs, shadowy streets and sweaty faces. The dream sequence in Moontide with Ida Lupino is another one of my favorites.  That song “Garden” by the punk band the Fall comes to mind as a bizarre dream song; the singer mentions something about a three-legged, black/grey hog. Ann Magnuson, of course, makes the best dream music!

Hey, I wasn’t fishing for a compliment, but I’ll take it! OK, haunted trailer parks. Do they exist? Your work has a lot of trailers in them. What do they represent to you?
The Salton Sea is a total haunted trailer park! They exist! Trailers represent freedom from the tyranny of permanent architecture. I grew up around a lot of trailers, and have always liked how sporty they looked and how people modify them. You imagine everyone who lives in one looks like Evel Knievel or Bob Eubanks. Also, the portable nature of trailers makes it exciting when you see them perched in unusual places. Of course, they also represent vessels for criminal activity and sad living.

That soap-bubble character is in the painting Integratron from 2010. There is so much going on in that painting! Tell what the teeth in the sky are all about.
Jesse: The shapes in the sky were jagged-looking clouds painted in my attempt to emulate the colors and style of the paintings of Don Van Vliet (Captain Beefheart), who I think died that year. He was a reclusive Humboldt resident for many years. The painting is a depiction of the heavy psychic vibes coming out of the Integratron (in Landers, near Joshua Tree) causing explosive havoc through successful contact with the alien. I imagined what would happen after a serious psychic channeling episode, maybe after one of those particularly tense Integratron sound baths. You know, psychic experiments gone wrong! It could also be read as some crazy failed drug transaction and meth-lab explosion. It’s good to have a giant scrubbing bubble to clean up the mess when that happens.

You have 10-year survey show opening in Tahoe soon.
Yes, the show opens September 29 at the Haldan Art Gallery at Lake Tahoe Community College. The title of the show is “End Times Yard Sale.” The gallery space is beautiful, and huge! So I am bringing 10 years worth of work to fill the space. I am looking forward to the show! It will continue through December.

Ann: Wow, I better combine a skiing/art trip up there this winter! Thanks Jesse, it’s a pleasure sharing The End Times with ya!