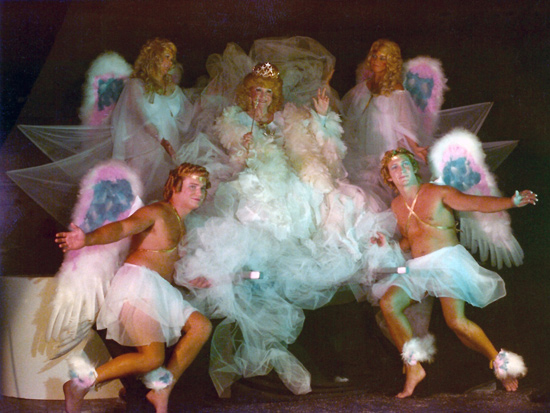 Magnuson: There is nothing more cosmically “out there” than the UNARIUS Academy Of Science. Warning: This isn’t your grandma’s “science.” But it is your fairy godmother’s science!

I used to watch the UNARIES public-access show back in the mid-’80s when I first started hanging out in Los Angeles. The group’s very theatrical pageants presented personal psychodramas that involved past lives, extraterrestrials and a benevolent geriatric leader. Her name was Uriel (an acronym of Universal, Radiant, Infinite, Eternal Light), and she offered her followers unconditional love while channeling teachings and prophecies from the Space Brothers (a.k.a. advanced inter-dimensional beings who exist on higher frequencies). Oh yeah, and she looked like Barbara Bush dressed up as My Little Pony. It’s kind of hard to describe. An ex-boyfriend, who actually turned me onto UNARIUS, put it this way: “Imagine if Aunt Clara from Bewitched had a religion.” But that’s from a non-believer.

Jodi Wille is a believer. Jodi wrote the book on the Source Family and directed the extremely popular documentary about them as well. Both were hits among The In Crowd. (I’m not the only one who ascribes the current rage of young women dressing like ethereal hippie chicks to the publication of the Source Family book.) Now Jodi is doing for UNARIUS what she did for the Source Family, bringing their guileless message of love and healing to the wider world. Yes, even to the pithy cynics!

Ann: Jodi, the short film you did for The Front on the Unariuns is the perfect primer for folks just hearing about these UFO spiritualists. How can people see the film?
Jodi: Right here. They have a couple extra offerings on the site, too, including the article “What Is Psychodrama?” written by the Unariuns and Songs For Space Travelers, a ’60s and ’70s spiritual underground music playlist I curated.

Ann: Tell me what is so important about the UNIARIUS message, especially during this election year.
Jodi: Our world is such an apocalyptic mess right now. Anyone who can move past the cynicism and hopelessness, bring deeper meaning to our lives and point a possible way forward has value. Unariuns are unrepentant idealists who believe that there’s no greater power in the universe than love and that the future of planet Earth is positive and progressive. They don’t deny their dark side but aim to transform and heal it through self-examination and creative expression—painting, writing, singing, dancing, etc. Whatever they’re doing works for them and encourages them to be decent, caring people, the kind of quiet Americans who help hold this country together. If only we could get Donald Trump and Hilary Clinton—hell, most of Congress—to do a past-life psychodrama therapy session together re-enacting their regrettable deeds in the Orion galaxy 100,000 years ago, we’d have unicorns (or at least alpacas) grazing on the front lawn of the White House.

Ann: I vote unicorns! I wonder if the UNARIUS members used dreams in their work with psychodrama therapy? Certainly those films and plays they make are quite dream-like. Nearly all the stories represent the archetypal hero’s journey. Even if one doesn’t believe in the “reality” of past lives, the Unariuns have recreated legitimate archetypes that live within each person, spinning modern myths in a culture that has lost touch with essential life-transition rituals. Since we don’t have many left, we must create our own. UNARIUS seems to me a trippy example of how that can be done.
Jodi: Exactly. Plus, because of their practices, which aim to enhance their psychic and intuitive abilities, the Unariuns have extremely vivid dreams. They communicate with benevolent spirits and extraterrestrial beings in their dream state and receive personal guidance and revelations that frequently benefit them in their waking lives, even sometimes resulting in radical physical healings.

Ann: What are the similarities between the Source Family and UNARIUS?
Jodi: Both groups attracted a number of very good-looking, creatively talented, idealistic young people who were willing to dedicate themselves entirely to the experience. Both had charismatic leaders who are still beloved by most members of the group and who had a highly original, audacious sense of style—both in their teaching methods and in the way dressed. Both groups produced creative work (Source Family: music; Unarius: films and videos) that for decades was disregarded or mocked by many but that in recent years has become increasingly collected, respected and even revered by certain music and film aficionados, fashionistas, writers and artists.

Ann: How do millennials react to all this? So many young people were dressed up in cosmic retro-wear at the premiere (in L.A. at the Standard, Hollywood). Do you see a hunger for deeper meaning, healing and spiritual life—no matter how that may manifest—in an increasingly narcissistic culture?
Jodi: Absolutely. So many of the Source Family and UNARIUS fans I’ve met in their 20s and 30s seem to be drawn to the DIY collective and idealistic aspects of the experience, people coming together in a creative, wildly outside-the-box way to create a world they want to live in. The so-called kitsch and far-out aspects of both groups bring provocative, aesthetically exciting and even slightly dangerous elements, adding allure and a high playfulness that other spiritual groups and practices and things like yoga don’t really have.

Ann: How would you best describe Uriel, a.k.a. Ruth Norman (the spiritual leader of UNARIUS.)
Jodi: Today my friend Jon described her as “Divine meets Carlos Castaneda.” I like to say “Imagine if Glenda the Good Witch had a baby with Liberace on a spaceship.”

Ann: That’s the perfect description! What lies ahead for you and UNARIUS?
Jodi: We just returned from mounting an 100-piece UNARIUS art, photo, film and artifact exhibition at the Horse Hospital arts center in London, and I’m currently developing the material into a project I’m very excited about but can’t talk about yet. Meanwhile, on October 8-9, UNARIUS is hosting its annual “Interplanetary Conclave Of Light” weekend at their center in El Cajon, Calif., and the public is invited. This will be their biggest celebration in years, and they’ll have a full tour of the center including the video lab, printing press and costume room, with special workshops, a trip to the Space Brothers landing site, a procession down Main Street with banners and the Space Cad (which will release 33 white doves) and a screening of a brand new transfer of their 16mm masterwork The Arrival.

Ann: Wow! I better dig out my purple Quina gown and silver lamé cape and get down to El Cajon!