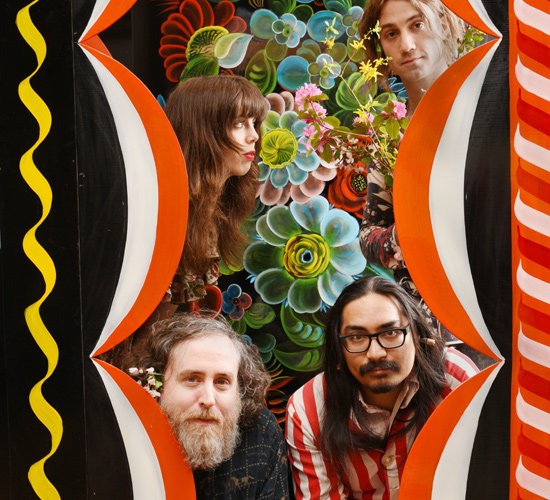 On the subject of epitaphs, it’s been written that the quality of a life is not contained in the dates on the stone but in the hyphen between them. That sentiment is equally true when the dates in question describe the gap between a band’s releases. In the Low Anthem’s case, the five years between 2011’s Smart Flesh and the diverse and distinct Eyeland may have been the most productive and evolutionary period.

After a nearly two-year tour for Smart Flesh, the Low Anthem decamped to its Providence, R.I., base to contemplate its next moves. The band found itself engaged on a variety of fronts—it began a project to rehabilitate the Columbus Theatre in downtown Providence into a performance/studio space; lost its manager to corporate acquisition; its labels dropped the group as the gap between albums widened; and, perhaps most damaging, three of the band’s five members defected for varying reasons. It was a string of events that would have unraveled a lesser group.

“We were floating in free time, just me and Jeff (Prystowsky), the only other original member,” says frontman Ben Knox Miller. “We would look at each other and go, ‘Do you believe in all these other projects we’re doing?’ We agreed that this time was good to let the chemistry fully dissolve back down to the elemental.”

When the space—also named Eyeland—was operational, Miller and Prystowsky further divided their time by recording other bands in the studio and booking the theater. Having vast eyewitness experience on how not to run a venue gave them an upper hand.

“It’s a venue run by musicians, so you don’t walk into an environment where you feel like a fish out of water,” says Miller. “It’s not some corporate place; it’s like our living room and your living room, and it’s very personal. John C. Reilly played here and was interviewed for a New York Times piece, and he said, ‘It’s nice to see the inmates running the asylum.’ That’s the vibe we’ve cultivated.”

Simultaneously, the pair was taking chunks of time to work on what would ultimately become Eyeland. It was a long process made more difficult by the absence of management, finding a new label (they signed with Concord/Razor & Tie/Washington Square) and dealing with the loss of most of the band.

“The record has been like a painting you leave in the kitchen, and every time you sit down to eat breakfast, you’re like, ‘Oh, fuck, I’ve got to cross that part out,’” says Miller. “It’s always there on the wall while all these things have been going on.”

When Miller originally came up with the name Eyeland, he and Prystowsky played a word association game in a local bar, working out the potential ways that listeners might perceive the title.

“There seemed to be a whole host of one-step associations that had very different suggestions,” says Miller. “Without any specific interpretation that this was bent toward, the fact of its interpretational ability gave us the confidence that there was room to explore and let it not be any one of those things. It was very much a process of discovery for us, and I’m grateful for the time we had to let that happen organically.”

As Miller was writing songs for Eyeland, he also conceived a 12-page abstract narrative intended as a liner-note key to connect the arc of the songs. With the shifts and alterations in the album’s form, that idea was shelved.

“At one time, it was very elaborate, and you could trace it from A to B,” says Miller. “Four years later, I’m not sure that’s still true. I don’t have perspective to know that anymore. There were 26 songs when we started looking for a place to record, and I think eight of them survived, so you have this constellation of moments from the story that are now abstracted by what’s been taken away.”

“I was like, ‘OK, I get it, but now we also need the music to come the other half of the way to meet that,’” he says. “From that point on, it was like day one again. We had this whole new mission to give that collision some kind of order. That was one of those turning points where we thought we were done, but we were just getting started.”