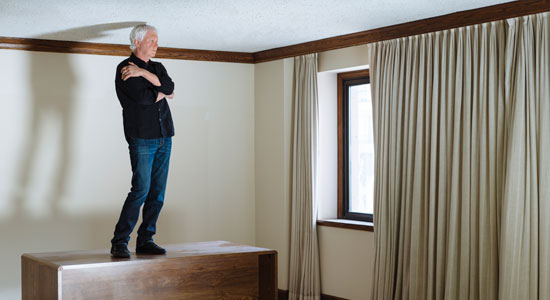 With first-ever Guided By Voices double LP August By Cake, Robert Pollard has released his 100th studio album. And given he’s the most prolific musician in the history of rock, he’s already finished number 101. MAGNET asked punk-rock legend and massive GBV fan Mike Watt to interview Pollard to get the backstory.

I first got into Bob Pollard’s music when a friend played me a seven-inch that had a few tunes on it. I dug it right from then; it spoke to me. I’ve always wanted him on my Watt From Pedro radio show to ask him about his musical journey. What a mindblow that now I get the chance … —Mike Watt

What is your earliest music memory?
As far as rock ’n’ roll is concerned, because that’s all I remember anyway, it might seem pretty clichéd for someone at my age, but it actually was seeing the Beatles perform for the first time on The Ed Sullivan Show. My entire family watched it. It was a huge event for everyone except my dad. He wasn’t so impressed. He told me a few years after that that the Beatles were good songwriters, but they couldn’t sing. He thought you had to croon to be a real singer. He also despised Elvis.

What was the first record you bought?
I remember my dad buying me a 45 at a department store called Ontario’s. It was “Count Me In” by Gary Lewis And The Playboys. I’ll never tire of that song because it was my first record. I was hooked and wanted more, but I didn’t have any money. So a friend of mine named Billy Perkins would steal 45s for me from the department store. I’d give him a list, and he’d stick five or six 45s down the front of his pants, stick his dick through the center holes. I know because he showed me how he did it. Then he’d just walk out of the store. You know, “Nothing for me today. Thank you.”

When did you first pick up a musical instrument?
I used to bang around on cheap guitars and chord organs when I was a little kid. I didn’t know how to play, but I could make a noise and sometimes record it on this small, cheap reel-to-reel machine that I had. I actually bought a guitar with my high-school graduation money and taught myself how to play it in college—at least well enough to become a better songwriter. It was an imitation of an Ovation acoustic guitar called Applause. It looked just like it with the hard-shell, round back, but the strings were really high off of the neck and difficult to depress. It really fucked up my fingers and ultimately made it much easier for me to play when I was later able to afford a good guitar, a 330 model Rickenbacker.

Did you have music in school?
Yeah, it was just general music class in elementary and junior high. I had Mr. Cox at John H. Morrison Elementary. We call it Jim Morrison Elementary. He cast me in the big school musical production of Snow White And The Seven Dwarfs as one of the dwarves. I shit you not, I was Dopey. I had Mr. Rudolph in junior high, and he was a real prick but a pretty good music teacher. I remember him saying that music is like eating olives: At first you don’t really like the taste, but later it grows on you, and I remember thinking, “Man, he’s totally right.” This was in sixth grade. 1968 or something. I was just beginning to hear more challenging music on the radio, and at first I didn’t really like a lot of it. It was bubblegum up to that point.

When did you first start playing with people?
We tried to form a band in sixth grade. We were going to be called Jello. My best friend, Scott Sears, could play drums, and I could sing a little, and girls actually thought both of us were cute—so we had the foundation. We couldn’t find anyone who could play guitar, so he would play drums and I would sing along with records. We performed “Proud Mary” at the school talent show and at the parent/teacher conference later that night. We got out of synch with the record, but it still went over really well. The mothers and little girls thought we were adorable.

What was the first band you were in?
It was the next time I performed before a crowd, and it wasn’t until seven years later. We called ourselves Anacrusis. It was a musical term I found in a book, which means to start a song on the upbeat. It had a symbol with an upside-down U and a period at the bottom center. We were an arena-rock cover band, so I put a lightning bolt through the upside-down U, and it became our logo. Beneath it I wrote, “Power In The Ultimate Form.” I was a freshman in college, but the rest of the band were in high school, at Northridge, where I graduated. One of them was Mitch Mitchell, who formed Guided By Voices with me. Anyway, the Northridge high-school kids thought we were great until we started doing originals. Then Mitch and I got into punk and new wave and cut our hair really short and were asked to leave the band. That was the beginning of Guided By Voices, even though we didn’t take the name officially until about 1982.

Do you remember your first gig? When was it, and what was it like?
It was with Anacrusis in 1976 at a venue called Brookwood Hall. It was on a Friday night, and I had classes during the day at Wright State University. I couldn’t concentrate to the point of being nauseated because I was so nervous. We had only practiced three times and only once as a full band, so I thought we would, in all likelihood, humiliate ourselves, and I’d heard that there were going to be 300 kids at the show, and it did end up being a full house. So anyway, the opening band was called Arrival, and their motto was “Rock ’N’ Roll.” Their lead singer was wearing a T-shirt that said, “Tits And Wieners.” Their lead guitar player was so fucked up on quaaludes that he couldn’t play. They tried to play “Johnny B. Goode” and couldn’t do it, so I got a huge surge of confidence because we knew about 25 songs—stuff like “Be My Lover” and “Seasons Of Wither,” and I knew we were going to kick ass. And we did. They booed Arrival off the stage and went nuts for us. I was a jock, and after the show, freaks were coming up to me going, “Dude, I’m sorry, I didn’t know.”

How old were you when you wrote your first song? What was it about?
I was maybe eight or nine years old. It was called “Corn Country.” I sang it for Superchunk once in the dressing room at a show, and they thought I was nuts. It was a nostalgic song about growing up in the Midwest in the middle of fucking nowhere. In the lyrics, I pretended that I’d moved away and then came back home to “Corn Country.” The title says it all.

Do you remember your first recording?
Well, I mentioned the primitive reel-to-reel tapes we made, but if you’re talking about in a studio, we recorded our first record in a 24-track studio in Kentucky called Group Effort Studios, and it sounded like shit and we sucked. And no one gave a shit, so I vowed that on the next one, which became Devil Between My Toes, that since no one really cared, I could put exactly what I wanted on it, with no regard to sound quality or performance. I like that record, and I realized that that was the way to do it.

What have been your favorite collaborations?
I dig them all, but it would have to be Circus Devils, hands down. We just wrapped it up after 14 albums. That’s pretty fucking good for a collaborative side project.

When you write, does the music come first or do the words? Is it different every time?
It’s different with each project, but in recent times I like starting with lyrics. That way, you tend to form different melodies or phrasings around each line or section. I kinda work my way through from start to end, and it creates more challenging or interesting structures. It’s harder to pin down a particular style or genre that way. It’s more psychedelic or progressive in approach, but it’s still very melodic. It’s still songwriting and not just jamming. Sometimes, though, a melody or chord progression comes to me, and I start with it.

When songwriting, do you ever start with a title? I ask because that’s always the way I do it.
First of all, your titles are great. Yes, I would say about 90 percent of the time I start with a title. It becomes the inspiration for what will come next—for how it should feel and sometimes even what kind of song: Pop? Punk? Anthem? Novelty song? The title sort of dictates where I’m going to take the song. Sometimes when I start writing the song, it takes a different direction. Or when I’m finished, it’s not what I expected, and I’ll change the title.

What’s your least favorite song that you’ve written?
It was a song on Same Place The Fly Got Smashed called “Ambergris,” because it’s just completely silly and ridiculous, but now I kind of like that one. I would have to say “Hold On Hope” because it’s such a sappy-ass, commercial-radio ballad. Guided By Voices fans really like it, though, and since Glen Campbell did it on his final album, it doesn’t bother me so much anymore. It was originally supposed to be a much heavier recording. That’s the version we’ve put back into the live set recently.

Do you ever see yourself “retiring” from music?
No. Honestly, I can’t imagine it. Maybe from performing live at some point but not from making records. Not as long as I’m able.